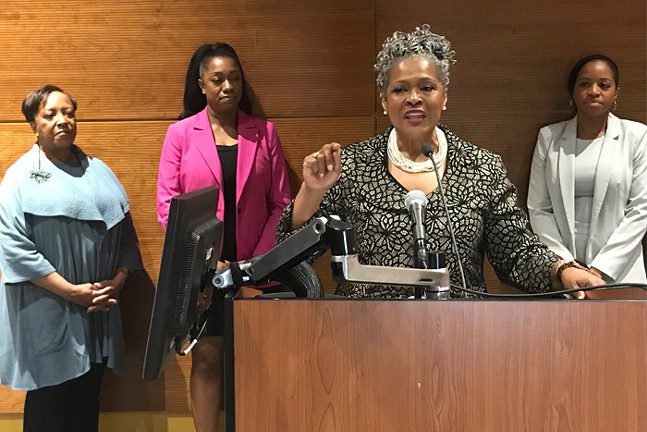 In Pittsburgh, the pay gap between Black women and white men is larger than the national average. A recent report by the Black Women’s Policy Center also notes poverty is the most pressing concern for Black women in Pittsburgh.

These, according to comments made during a press conference this morning at Carlow University, are two of the reasons why local women’s organizations, the Black Women’s Policy Center, Women and Girls Foundation, and YWCA of Greater Pittsburgh are launching a new initiative to promote pay equity for women, especially Black and Brown women.

Carlow President Dr. Kathy Humphrey says the Level Up: Greater Pittsburgh Pay Equity Campaign is a prompt “to do more than just talk about a topic but to act on a topic. It is a topic of justice, of equity, of pay, and of ensuring that people are able to do with their lives what they were called to do.”

Level Up "seeks to create systemic change by calling on greater Pittsburgh employers" to take a pledge to adopt five measures the groups say will make positive progress towards pay equity.

The five steps named in the pledge are:

“We are not naive to think we can change this and close this wage gap in a year or six months, but we do think that we have to start somewhere,” Rochelle Jackson, founder and director of the Black Women’s Policy Center, tells PublicSource. “When you pledge to us, we take that as an acknowledgment that this is an issue and that these are challenges for Black women and you’re willing to work with us to close this wage gap.”

As part of the campaign, employers are invited to attend a series of workshops to help them move toward closing the gender wage gap in the region. A letter outlining the pay gap problem and the proposed pledge will be sent to more than 200 employers across the Pittsburgh region, according to organizers.

"It is time Pittsburgh truly becomes the 'most livable city' for all of its residents,"  Jackson said during the press conference. "For far too long, structural racism and sexism have negatively impacted women, particularly Black women. The Level Up: Greater Pittsburgh Gender Pay Equity Campaign calls on employers to exercise their power to end gender pay disparities, which disproportionately impact the earning potential of Black women, who have the highest labor participation rate among all women."