Local cyclist takes on the Dirty Dozen in weight-loss journey

“The hard part of this is that there is another 363 days until I can prove I can do it.” 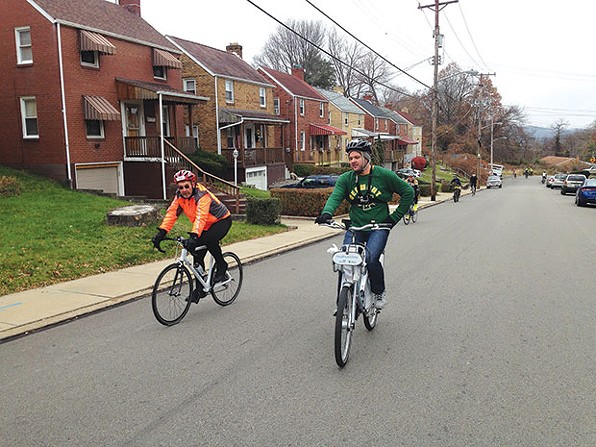 On Nov. 26, hundreds of cyclists climbed up a hill in Stanton Heights as part of Pittsburgh's iconic Dirty Dozen bicycle race. The course traverses the city and its suburbs, and cyclists must climb 13 of the area’s steepest hills along its 50-mile length.

On this cold, gloomy day, most cyclists were riding ultra-light bikes that weigh less than five pounds and wearing trim-fitting spandex and other specialized gear. But one rider took a different approach. Jeremiah Sullivan rode up the Stanton Heights hill on a 37-pound Healthy Ride bike-share bike, wearing a flannel shirt, jeans and a hoodie.

“This is what I am used to, this is what I trained on, it would feel like cheating any other way,” said Sullivan as he rested at the top of Woodbine Street, joking about his atypical bike-race appearance. “I should have put a keg of beer in this thing.”

Sullivan is not your typical cyclist. He’s not a spandex-wearing, weekend-only recreational rider, nor is he a ripped-jeans-clad, fixed-gear city commuter. He got on a bike to lose weight.

By taking to two wheels for an hour each weekday, either on a Healthy Ride or a secondhand bike he owns, Sullivan has lost more than 50 pounds in the last year. (Six months before that, he lost another 50 pounds thanks to a diet.)

He is now 106 pounds lighter than his previous 300-pound weight. Additionally, he has gained a new appreciation for the city from a cyclist’s viewpoint, and has explored trails, hills and almost every city neighborhood.

“I was a large person my entire life,” says Sullivan in an interview with Pittsburgh City Paper. “I have lost 50 pounds [riding bikes], but I also want to be part of the community and part of the revitalization of the city.”

Sullivan grew up in Vergennes, a small town along Otter Creek in the middle of Vermont. He says there are hills there, but there aren’t any paved roads that travel up them, so biking up slopes is only a recent passion.

Despite his progress, he was upset he didn’t complete the entire Dirty Dozen race. Impressively, Sullivan finished nine of 13 hills on an extremely heavy bike whose lowest gear pales in comparison to the low gears of specialized bikes. (The lower the gear, the easier it is to pedal.) His downfall was Canton Avenue in Beechview, which is arguably the steepest paved road in the country. “The bike might as well be a one-speed up that hill,” says Sullivan.

Two days after the race, when Sullivan spoke to CP, he was kicking himself for not finishing. “The hard part of this is that there is another 363 days until I can prove I can do it,” he said.

But his wife, Emily Sullivan, is easier on him. She is fully supportive of his weight-loss goals and passion for biking. “I told him the other day, ‘You are not the man I married, but in a good way,’” she says.

Emily Sullivan says her husband has become much more active since starting his lunchtime riding routine. “It has been a huge improvement in my life, he is so much more active,” she says. “Just in general he has more energy to do things.”

Together, they have two young children, and both parents work. Because of his work and family responsibilities, Sullivan has limited time for exercising, so he decided to dedicate his lunch break to burning calories. And with a Healthy Ride station right outside his office, he took to the trails and beyond.

Sullivan says his typical rides range from traveling from Millvale to the old penitentiary beyond the McKees Rocks Bridge on the Ohio River Trail, to riding from Point State Park to Bloomfield. He says one of his favorite trips is riding to the top of the Upper Hill District, for great views of the East End that other people outside the neighborhood rarely experience.

Healthy Ride director David White, who provided water bottles and cheered on Sullivan during the Dirty Dozen, says this goal is something that could catch on to all bike-share riders. “[Sullivan] captures that sentiment perfectly,” says White. “Pittsburgh is pretty remarkable. With 90 neighborhoods, it’s difficult for anybody to know all the gems, but getting on a bike is a great way to see as much as you can.”

And White says that Sullivan showcases an added, unexpected, benefit to riding bike-share bikes. “To be honest, I would never [have] envisioned that someone would have that much improvement in their health, but it makes sense. It was a delightful surprise,” White says.

Sullivan plans to conquer the Dirty Dozen next year on a Healthy Ride bike, and his wife is confident he can finish. “When he started this weight-loss thing, I thought he would lose a bit [of] weight and plateau,” she says. “But he has just really changed so much. I don’t see him ever going back to his old habits.”