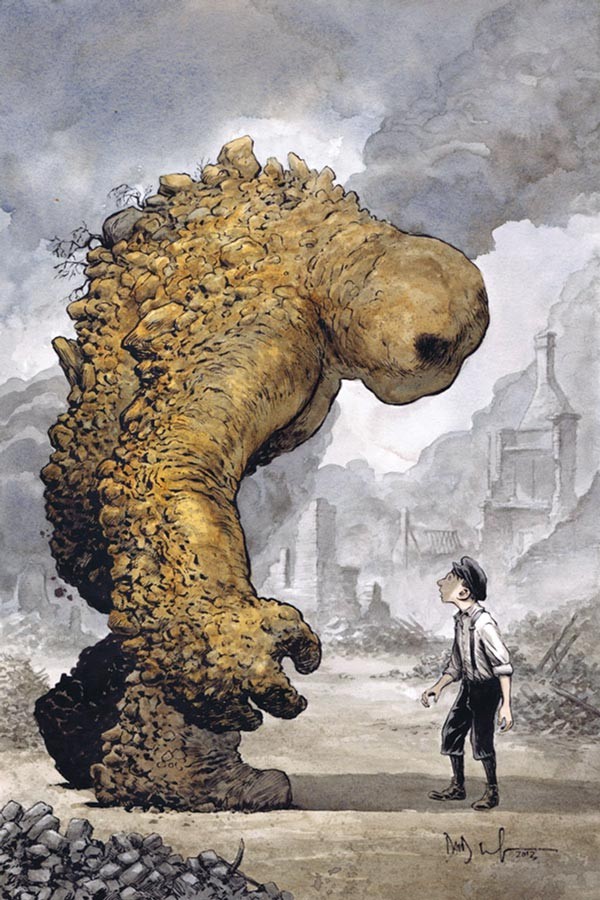 Dave Wachter's cover art for Breath of Bones: Tale of the Golem

When Dave Wachter was approached to illustrate Steve Niles and Matt Santoro's World War II comic Breath of Bones: Tale of the Golem, several things appealed to him. The first was the chance to work with Niles, a noted comics horror writer. The second was the story — another period piece for the locally based artist's portfolio, which includes narratives set during the Viking era, the Depression and the 1960s.

The third was the title character. "I like drawing monsters," says Wachter. "I like seeing a monster as a hero."

Set in an unnamed Jewish village, Breath of Bones (Dark Horse) follows a young boy who witnesses a British plane crash. Nazi soldiers investigate; for protection, the villagers assemble a golem, a voiceless creature from Jewish folklore. Formed from mud and obedient to human commands, their creation is a massive being that suggests The Thing from The Fantastic Four.

But unlike The Thing, the golem has twigs and plant roots sticking from his back. For realism's sake, Niles wanted the golem to be only partially formed, assembled hurriedly by people working on different parts of the body at the same time. And Wachter drew the golem's face in a minimalistic style, "because it's more of a reflection. [The golem is] not really its own person."

The black-and-white drawings were Wachter's idea, too. He believes the look fit the time period, but allowed him to deviate from a comics norm. "A lot of publishers won't take the risk of something in black and white," says Wachter, whose work has earned Russ Manning Award and Will Eisner Award nominations. "It lets me establish a different kind of mood that wouldn't be possible in color. Instead of limiting me, it gave me more opportunities."

The biggest challenge was representing the time period accurately; Wachter used Google image searches and The Smithsonian's Flickr account to capture early-20th-century Europe. Fan communities helped, too. "There's a lot of groups of aficionados — people who are World War II buffs," he notes. "They have websites and message boards where they get together and share photographs."

Last month, Wachter celebrated the release of Breath of Bones at The Toonseum. Originally from Cincinnati, Wachter moved from Chicago to Pittsburgh four years ago. Pittsburgh, he says, has "all the things I liked about Chicago, [but it's] not quite as expensive and not quite as overwhelming."