Bankrupt Bodega is bringing together community, charity, and artistry through fashion

On Thu., May 16, Bankrupt Bodega kicks off The Bloomfield Corner Store, a week-long fashion and art pop-up, at Gallery One Collective Works with music from Charlie Scott and complimentary cheese and cocktails. Each night, a different creative scene in Pittsburgh will have the chance to showcase their work. One night has all photographers. One night has all-female artists, and another has all-male visual artists. One night is jazz-themed. One night features a hip-hop clothing brand. Mixed in with featured artist pieces - all of which are available for purchase - are vendors, musical performances, and more.

Bankrupt Bodega is an independent clothing and photography brand that creates unique and bold urban imagery relevant to a specific community. Those images are then printed out as a fine art print or onto clothing and accessories. A portion of the profits is donated to a local non-profit that directly engages within that community.

Bruener, a lover of clothing who has a background in photography and a degree in urban planning, started Bankrupt Bodega in November 2018 to combine all three of his interests. Bruener grew up in Forest Hills and attended the University of Pittsburgh, but his goal is to expand Bankrupt Bodega outside of his hometown.

Photo: Patrick Bruener
David Neaminis wearing Bankrupt Bodega's Parking Chair Tee
Lawrenceville/Bloomfield, where Bruener currently lives, was the first area featured in Bankrupt Bodega. 412 Food Rescue presently receives part of the proceeds from sales. After The Bloomfield Corner Store, however, Bruener plans to switch to a different non-profit and area of the city. He will continue rotating Pittsburgh localities until he’s able to expand further.

“Which is really cool for me, but I wanted to have an event to sort of show my face and to have a more hands-on feel for the brand,” says Bruener. “I also felt it was really important for me to be able to build a community of different artists and different people so that its more than just a clothing brand. It can be a networking event, a collaborative art show if you will.”

That is where the idea for The Bloomfield Corner Store came from. The event, sponsored by Flower City Printmaker, was originally going to be one night, but when the owner of Gallery One Collective Works suggested Bruener do a week instead, he jumped on the opportunity.

Bruener hand selected all the artists and musicians in the event; he simply went with whoever’s work in Pittsburgh that he liked and enjoyed.

“Some are friends,” he says, “some are strangers I haven't met whose work I’ve seen on Instagram. I wanted it to be as diverse as possible.” 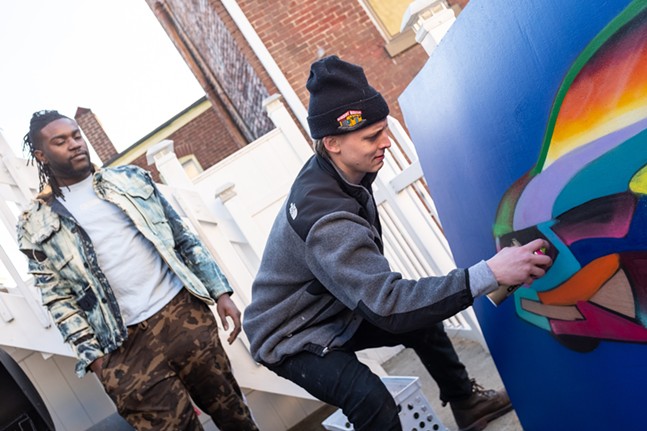 Harley Skibicki, whose work will be seen at The Bloomfield Corner Store on Mon., May 20, says that being a part of a pop up with local artists has been incredibly inspiring. “Katie Makowski, another artist that is showing on May 20th, and I have been working on projects and motivating one another for the show and for this ‘summer of art’ in general. Being alongside talented members of this community makes me feel so grateful, and I’m excited.”

So far, Saturday has gotten the most attention. The store opens at noon with four different clothing designers vending until about 6 or 7 p.m., before local rapper My Favorite Color performs at night.

“He has a lot of buzz going on in the city,” says Bruener. “It’s also the same days as Lawrenceville Art Crawl, and we’re just up the street from that.”

But no matter what day, Bruener encourages everyone to, “just come out and have fun, network, and look at all my friends’ art.”