Local bands chip in for Support the Troops compilation

A new compilation of predominantly local metal bands, Support the Troops was produced by Marc Giuliani at Studio635 in Bridgeville, with the goal of sending copies to troops in the Middle East and raising funds for charitable nonprofit Freedom Is Not Free. It's hard to knock someone for trying to support wounded troops and their families, but selling CDs is a hard way to make a buck -- especially if you comply with the cover's instruction to "Pay no more than $5."

It's also a bit hard to swallow the opening salvo from Method of Destruction (the sole non-local band featured): two songs entitled "Fuck the Middle East" and "Speak English or Die." Ugh. The only other transparently political track is the upbeat punk jam "On the Line" from Iron City Hooligans, which advises "They're protesting in the cemeteries / disrupting the families / And it's all about what's wrong or right / It's about the men who sacrificed."

Much of the compilation is given over to metal and hardcore fare from In the Wake, Deliberate Intent, So Help Me God, Soulscape and Gutrench. Old-school metalheads Crown the Lost offer "Symbiotic," a sprawling live shred-fest featuring Chris Renaldi's throwback vocal melodies; producer Giuliani demonstrates his own high-speed talents under the name I.T.S., singing and playing nearly all the instruments.

Bucking the metallic norm here are Fell Upon Thieves' more modern-rock sound, and an epic semi-acoustic instrumental from a band called (I am not making this up) Darth Hidious. Catgut Tonic's "Big Fish Eats the Little One" has an appealing early-Soundgarden feel; fun, if a bit clunky, it's probably the song most worth a rewind. 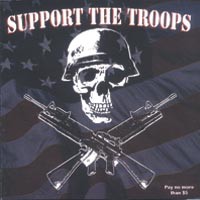