Brothers Brad and Marc Schneider have been playing music all their lives, but their age difference meant they were usually into different types of music. Brad, 29, was the first to pick up an instrument (bass), and he passed along his knowledge and interest to Marc, seven years his junior. "Eventually we caught up to one another, though," Brad notes, and in 2007, they formed The Incline.

The Incline, the core of which consists of the two Schneiders, will release its first full-length album, Road to Home, with a show at Double Wide Grill on Fri., May 22. While the Schneiders have had a rotating cast of drummers and other backup musicians in the past, they'll be accompanied by current full-time drummer Sean McCormick as well as some former personnel.

Marc, who studied recording arts at Full Sail University in Florida, penned many of the tunes on Road to Home at school; after a scare involving a benign tumor on his brain, he graduated and returned home, with Brad joining him on bass and contributing to the songwriting for the band. "It's our nature to both be songwriters," explains Marc, noting that the band's newer material is more balanced between the two.

While it's close to the jam scene, The Incline's use of more stringent song structures make one hesitant to deem it a jam band. Fans of sunny, vocals-oriented pop along the lines of Ben Harper might well find the band quite appealing. A sense of humor doesn't hurt either: In an otherwise earnest album, lead-off track "George Foreman" amounts to something of a novelty song about the eponymous fat-reducing grilling machine.

Jokes aside, The Incline's sound is largely of the triple-A-radio variety; there's no specific genre to ascribe to the band as it jumps from alt-country sounds to reggae-influenced pop and even the odd rapped breakdown (ill-advised in theory, though the members pull it off better than you might expect).

In fact, genre-jumping may be The Incline's Achilles' heel. The brothers are prolific songwriters, and with that comes the risk of a disjointed body of work, which Road to Home occasionally verges on. At other times, though, songs blend seamlessly into one another, thanks to both the overarching flow and the skilled production supplied by the younger Schneider. 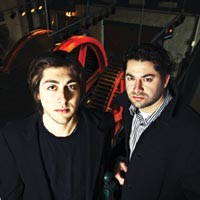 Onward and upward: The Incline