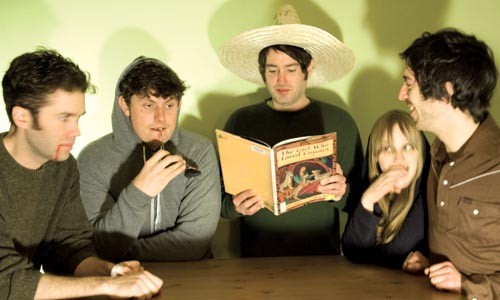 Wow and flutter: The Ceiling Stares

The first thing local rockers The Ceiling Stares want you to know about their debut cassette release is that they don't really expect you to listen to the tape.

The limited-run release will come with a digital download code, and the band -- which plays melodic, mid-paced rock that takes cues equally from '60s garage and the seedier edge of '80s and '90s indie -- knows full well that most of those buying the EP will be heading online to nab the songs. The cassette serves mainly as a tangible symbol of the release; band members created elaborate packaging that includes silkscreening and hand stitchery.

Recorded with Julin's roommate, Dan McNellie (of Test Patterns), the cassette EP is a way to work up to a studio release in a slow and measured fashion. With the download code, it's also a fun mix of DIY Luddism and progressive use of technology -- and it stems from a pragmatic sense of how members of the band see its status and its goals.

"We're setting ourselves up to sell every copy we make," explains guitarist Stephen Patchan, as opposed to doing a longer run of CDs and being left with a surplus.

"My old bands' CDs -- I've used them as coasters, used them to scrape the ice off my car," muses bassist Bill Julin. "I don't need any more of those."