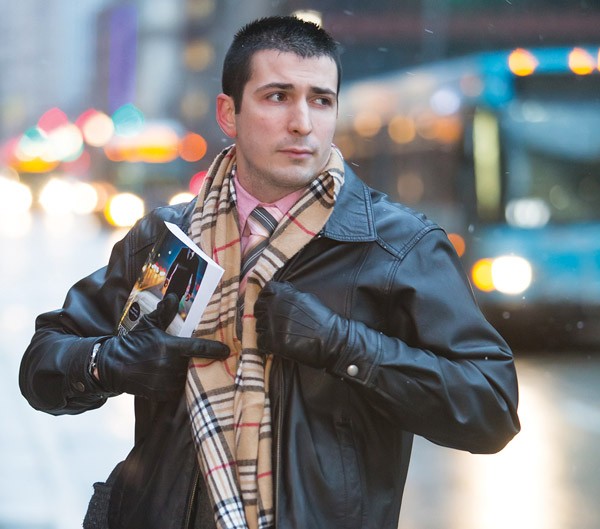 Michel Sauret spent the first 10 years of his life in Rome, Italy. Then his Italian and French parents immigrated to Pittsburgh. He joined the military and in 2008, at age 22, he was deployed to Iraq for a year as an Army journalist.

But all these circumstances, unusual as they might seem, don't interest Sauret half so much as the chance encounters he has on his daily commute. It's such coincidences that feature in his debut short-story collection, Amidst Traffic.

"These characters are kind of nobodies," Sauret says of the collection of 22 interconnected stories. "But that's the point. There's a guy digging a hole in his backyard, a guy who decides to start staring at people, and a woman who covers herself in tattoos because she doesn't know how to remember things. The coolest part is how their stories interconnect."

The book was self-published, though eight of the stories were previously published in such national and international outlets as the British literary journal Brand and the Hopewell Publications anthology Best New Writing 2008.

Sauret, now 27, graduated from the University of Pittsburgh's writing program in 2009. A year earlier, his coverage for Army publications of Iraq's reconstruction won him the Keith L. Ware Award for Army Journalist of the Year. He currently works as a public-affairs specialist for the U.S. Army Reserve in Coraopolis.

While discussing fiction, Sauret segues into three anecdotes about people he's met while driving to and from his office, including a traveling Irish family of nine he invited to stay at his North Side home for two nights.

"I love exploring that side of life, the random meetings and connections," he says. "We impact people every day. We drive through traffic and cut someone off. Maybe he'll go home and yell at his wife and you were just trying to get in the other lane."

Sauret, a new father holding down a full-time job, also has a photography business. He met a reporter at Big Dog Coffee, on the South Side, because he had a networking event there later with other photographers he'd met over the Internet.

Sauret became a Christian six years ago and his faith is prominent in his fiction. "When I was at Pitt I read a great amount of existentialist fiction where the whole point of the book was to tell you that life is meaningless. My work is a reaction to that," he says. "The way my stories are connected is related to my beliefs. If things are connected, they are connected for a reason."

Sauret says there is too little dialogue between groups with differing beliefs. "We can't just pass each other by," he says. "This book isn't intended to convert anyone. It's intended to incite a respectful conversation."

That conversation is a cerebral one. Characters in Amidst Traffic frequently engage in philosophical debates about good and evil, responsibility and personal freedom. Though Sauret's Iraq experience was relatively benign — he never fired a bullet — his fiction is troubled by the existence of violence in a world with a God.

Particularly striking in the collection are the "Duct Tape People." Across multiple stories, this dark-suited trio of "Facilitators" seeks out people who can foresee major disasters.

"These people were damn everywhere," Sauret writes. "They knew things nobody else could predict, and it was up to people like Adren, David and Victor to facilitate them, help them sort through what they saw, urge them to prevent disasters from happening. The Facilitators thought of themselves as Angels from God whose job was to reach out to the messiahs of the present world."

Sauret's inspiration came from an archive article he encountered in 2009, while interning at the Pittsburgh Post-Gazette. David Booth, an alleged visionary, telephoned federal officials with an accurate premonition of a 1979 American Airlines plane crash and labeled those fascinated by his visions as "duct tape people".

Next, Sauret plans to expand the "Duct Tape People" into a novel and take the literary-agent route this time. In the meantime, he speaks passionately about the business of self-publishing.

"It used to be that self-publishing was like being a vanity publisher," he says. "Now it means you're adventurous, you're an entrepreneur, you don't mind a little bit of risk."

"I knew I could put together a quality package," he says of Amidst Traffic. "I'm a photographer so I could do the cover. I was educated in writing so I could edit it. And from my public-relations training in the Army I knew that I could market it."

Sauret writes about lucky coincidences; for self-publishing purposes, he is one.