"Do you find it rude to cut across?" asks Alan Petrucelli. He's standing in Allegheny Cemetery. "I don't."

Neither do I, so on a picturebook-gorgeous fall afternoon we set off, strolling across the tombs of nobodies and robber barons, chatting about deep graves, Glasgow smiles and embalming techniques.

Petrucelli is the author of Morbid Curiosity: The Disturbing Demises of the Famous and Infamous. The new paperback original, just over 200 pages with a handful of black-and-white photos of famous graves, presents little death-nuggets about hundreds of famous folks -- gruesome morsels perfect for reading your sweetie to sleep.

Did you know that Charlie Chaplin's corpse was stolen in an unsuccessful ransom bid? That Jayne Mansfield wasn't decapitated, but scalped in the car crash that killed her? Or that the morgue photo that seems to depicts John Dillinger with a breathtaking 18-inch boner actually shows his arm at a weird angle thanks to rigor mortis?

"I love to visit the graves of famous people," says Petrucelli. Indeed, we began our stroll at the mausoleum of Lillian Russell, the actress and singer turned newspaper columnist and suffragette, who died in 1922, in Pittsburgh.

"I think there's something cool about standing at a celebrity's grave. 'This is Greta Garbo! This is one of my favorite actresses! I could never get this close. You're dead ... and you're just ... a legend.'"

Petrucelli (an occasional CP contributor) makes his living talking to The Beautiful People. He wrote a biography of Liza Minelli, and has published celebrity interviews and features in papers and magazines nationally, from Redbook to The New York Times. The low cost of living drew the peripatetic personality-hunter to Pittsburgh two years ago, after stints in Provincetown, Mass., and Palm Springs.

In every celebrity interview he's done -- and they are legion -- Petrucelli says the subject of death always seems to arise. Lucille Ball told him she found all the lifetime achievement awards to be more like obituaries.

Morbid Curiosity was to have been a photo book. But the publisher, Perigee (a Penguin imprint), objected that it would turn too many people off.

It was a photo of Elizabeth Short -- the Black Dahlia, a famous, unsolved and horrific murder in Los Angeles -- that made Petrucelli agree. One of the morbid photos in the book proposal was a close-up morgue shot of Short with her Glasgow smile (the mouth slit wide) sewn closed. "I would think, 'It's coming up, I'm going to turn my head.' I am so turned off by that photo."

The book's garnered plenty of notice. It's been rather fawningly mentioned (twice!) in the Village Voice blog -- Michael Musto called it "to die for." On the book's cover, Petrucelli pal Joan Rivers blurbed, "It's shocking and sinful, and I couldn't put it down." The Detroit News referenced it in a story about Aretha Franklin and Diana Ross planning burials at Woodlawn Cemetery there.

But what about profiting from death? Is the affable Petrucelli really a ghoul?

"I love celebrities, I love cemeteries, I love dead celebrities. I am not exploiting them, I'm celebrating their lives and their deaths," he says. Still, he adds, "I started getting feelings of bad karma. One day I woke up thinking, 'Should I be doing this? Am I mocking the dead?'"

"I do mock, but it's informative," he concludes. "In life, when you become a celebrity, once you become famous and infamous, you're in the spotlight when you're alive, you still are when you're dead."

"I've never desecrated a grave. When I went to Sweden and I went to Garbo's grave, I did take a pebble," he confesses. "I am constantly surprised by how respectful people are in cemeteries.'"

What's Petrucelli's own preferred method for being planted at the end of it all?

"I have no idea. I'm a hypocrite! I freely admit that I'm a hypocrite. I have the ashes of my mother and my father and pets and people who are dear to me. I keep saying, 'I'm going to sprinkle these off the Eiffel Tower.' When it comes to me, I'm afraid."

As part of a series of local readings, on Oct. 23, at The Andy Warhol Museum, Petrucelli will read from the book and present some of those grotesque photos the publisher left out. (Leave the kiddos at home, yeah?)

He's also working on a second volume of Morbid Curiosity. He says it's practically writing itself. 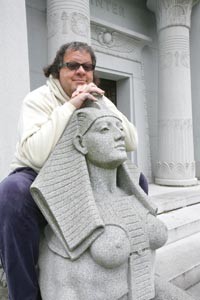