Honeys have "vintages," and even those similar in color from the same location can vary greatly in flavor. 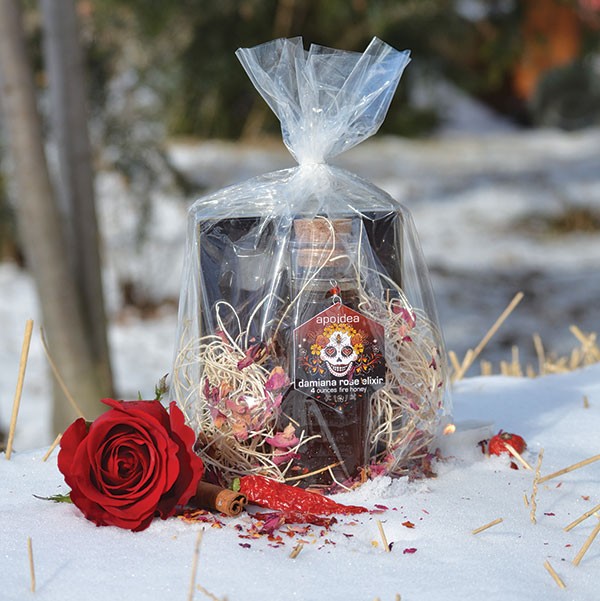 For many,Valentine's Day signifies chocolates, flowers or candlelit dinners. But for Christina Joy Neumann, the holiday inspired an "elixir of aphrodisiac herbs from plants that provide sustenance to a variety of bee species."

A horticulturist, botanical illustrator, architect and beekeeper, Neumann owns and operates apoidea apiary, which takes its name from the Latin name for the bee superfamily. Having recently returned to Pittsburgh to transform her family's historic Shaler home, she says, "It seemed like a really appropriate place to have a small apiary."

Don't let the word "small" fool you; apoidea's hives produced approximately 1,500 pounds of raw honey in the first year. It celebrates its one-year anniversary this Valentine's Day with an elixir inspired by Central American aphrodisiacs. The Damiana Rose elixir includes black-locust honey infused with damiana leaf, rose, vanilla and chili: Neumann recommends drizzling it on dark chocolate or adding it to cocoa.

Neumann's hives thrive, she says, thanks to her organic approach. Her yard, where several hives are kept, is enriched with a black-raspberry bush, fruit trees, a wildlife pond and a native plant garden. Rather than just "churning out honey," her interest is "in a deeper understanding of what is happening ecologically." Bees nationwide have fallen prey to mysterious large-scale die-offs called "colony collapses," which some blame on pesticides. In the face of that threat, Neumann hopes to educate customers about "the necessity of protecting and cultivating healthy sustainable habitats" for bees and other pollinators.