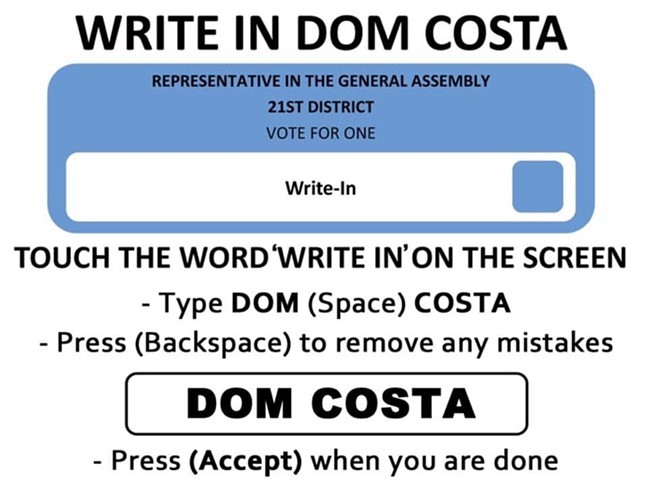 Post from WRITE IN: Dom Costa Facebook group
Americans Against Socialism is a group that has remained mysterious since the 2018 general when it first caused a stir in the local race for a state House seat between Sara Innamorato (D-Lawrenceville) and Dom Costa (D-Stanton Heights). Now, a campaign-finance complaint has been filed against the enigmatic organization for failing to register with the state and complete required financial reports.

Last year, Americans Against Socialism was identified as the group responsible for sponsoring several forms of political outreach in the 21st District that belittled Innamorato, a democratic socialist and first-time candidate, who defeated five-term incumbent Costa in a primary earlier in 2018. The group’s methods included sending unsolicited text messages to constituents and scattering political yard signs throughout the district reading “Vote Against Socialism! Write in: Dom Costa."

Americans Against Socialism’s controversial methods were similar to those carried out by Costa's campaign during the race. The then-state representative sent out mailers to both Democratic and Republican voters with contradictory messages. The mailer sent out to GOP voters asked them to write him in so he could get on the Republican ballot alongside the democratic one.

On Monday, Washington D.C.-based activist group Campaign for Accountability filed a campaign-finance complaint against Americans Against Socialism with Allegheny County’s Board of Elections seeking an investigation into the committee, according to a press release.

The complaint asks for an investigation into “multiple serious violations of Pennsylvania’s Campaign Finance Reporting Law.” It also requests an investigation into the group and those who may be connected to it, including local businessman Robert Kania, who was listed as a contact on a website tied to the effort that has since been taken down. Also named was Gary Britcher, an activist quoted as a supporter of the organization. Kania currently sits on the Port Authority of Allegheny County board, a spot he shared with Costa for several years.

The failure to file committee paperwork is a misdemeanor offense in Pennsylvania if the committee has incurred over $250 in expenses. There can be a fine of up to $5,000 and possible jail time for the treasurer of such a committee.

“Campaign finance laws exist to protect the integrity of the democratic process. When groups like Americans Against Socialism try to operate in the shadows and in tandem with corporations, the state can’t ensure everyone is playing by the rules, and the public loses,” Huling said. “If Americans Against Socialism violated any campaign finance laws, they need to be held accountable.”