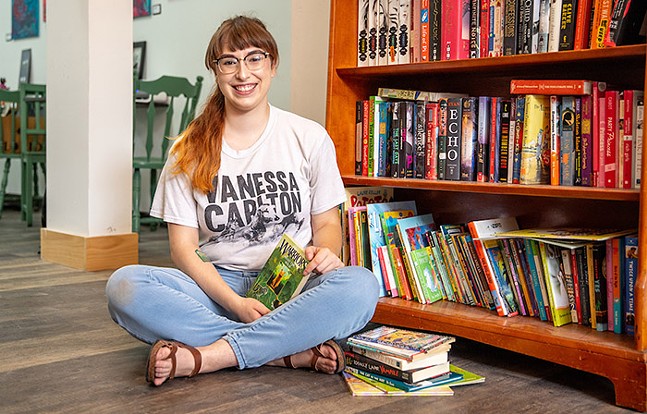 CP photo: Kaycee Orwig
Livy Ciotoli and Livy’s Library inside Black Cat Market
Most people store their books on a bookshelf, maybe a couple of bookcases if they’re particularly bibliophilic. Livy Ciotoli used to store her books in a warehouse.

Eventually, she moved her books to her business, the Black Cat Market, a cat cafe that recently moved from Lawrenceville to Garfield. Now, Ciotoli is relaunching Livy’s Library, a program she created to help distribute those books to children ages 16 and younger through a free monthly book subscription service, with pickups available at the cafe. And kids get to keep the books they get.

“Literacy for children, especially at a young age, is so crucial to the rest of their lives,” Ciotoli says. “So kind of just trying to bridge that gap a little bit. You know, obviously the public libraries are an option, but not everybody can get to them. It’s just also nice to have your own book to keep forever.”

While this incarnation of Livy’s Library is new, with the Twitter page first sharing the link to sign up on May 1, this isn’t the first time Ciotoli has organized a literature accessibility project for kids. Her first iteration started in 2017 and was inspired by Dolly Parton’s Imagination Library, which provides children with free, new books until their fifth birthdays.

At the time, Imagination Library didn’t have a partnership in Pittsburgh, so Ciotoli took matters into her own hands “to kind of fill the gap.” She primarily sourced gently used books from thrift stores, and she mailed them out to local kids. At the height of the program, she was shipping about 200 books per month, a process that relied on monetary donations and, eventually, Ciotoli’s own money.

“If you go to a thrift store, they're just filled with gently used books. People are always trying to find places for them because kids grow out of them really quick,” says Ciotoli. “I almost was like a recycling program for people's used books.”

After about two years, Ciotoli ended the program. She cites costs of shipping as well as the time and energy required to open the Black Cat Market, which took away from her focus on distributing books. Also, when people were uncertain how COVID-19 spread, Ciotoli didn’t want to make anyone feel unsafe with her monthly book deliveries.

“It just kind of felt like it was time for it,” says Ciotoli. This time around, she’s sourcing many of her books from individual donations as well as libraries. She’s posted in Facebook groups and on Twitter, encouraging people to drop off book donations at the Black Cat Market.

“I think people during COVID are kind of, like, getting a little stir crazy,” Ciotoli says. “So they were going through their stuff and trying to maybe downsize their book collection.”

Ciotoli currently has about 20 people signed up for this round of Livy’s Library. She hopes to work with local schools to distribute books as she did several years ago when she worked with Young Scholars of McKeesport Charter School, since it will allow her to provide books for more children and teens through the use of schools as distribution centers.

“There's almost a little bit of shame in asking for help sometimes, or guilt. And I think, with everything happening with the pandemic, it's kind of blown that apart,” Ciotoli says. “There's absolutely no shame in asking for things that you need. And there's so many people willing to help.”

While she only distributes books to children 16 years old and younger, she encourages people to bring any kind of book by the shop, since she donates any books that aren’t a fit for the library to Book’Em, a program providing books to incarcerated people. She also maintains a free “take a book, leave a book” bookshelf at the Black Cat Market, which doesn’t have an age limit for use.

For the books that fit the library’s age range, Ciotoli separates them based roughly on reading level, from board books, picture books, and early level readers for children through age 9, to first chapter books, middle-grade books, and young adult novels for older children and teens.

Ciotoli tends to receive more young adult book donations than the other categories. In the past, she received so many young adult donations that she would occasionally send out two books to teens per month. She often struggles, however, to acquire books for younger readers, despite those age categories receiving the highest demand.

“Board books are so difficult because babies, you know, they chew on them, they like to beat them up really bad,” Ciotoli says. “So typically, people just end up throwing those away.”

People can donate by dropping off gently used books to the store, filling out a form on the library’s website for a home pick-up, or buying a book off of the library’s Amazon wish list. All books on the wish list are $10 or less to help keep donations affordable.Livy’s Library. livyslibrary.weebly.com