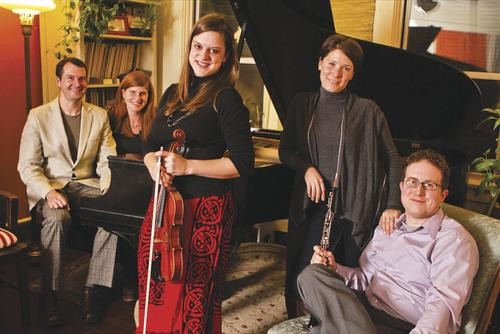 There was a time -- the days of Beethoven, Schubert and their contemporaries -- when new chamber music was regularly performed in people's homes. The masterpieces of that era are still around and loved, and similar work is still being produced, but these days it's rare for people to open their homes to chamber music.

Yet five local musicians, all in their thirties, are trying to win over their contemporaries with the same music, as their year-old Living Room Chamber Music Project tunes up for its ninth performance.

The group of Carnegie Mellon and Duquesne University grads aims to involve its audience, and make the music accessible.

"Sometimes audiences don't realize how important they are to the performance," says oboist and Project spokesman Lenny Young. "We invite them into the music." Consequently there's informal talk to supplement printed programs.

It's not a standard ensemble, but there are plenty of four-hand piano works and many pieces combining soprano, oboe or violin with piano. Plus, the Project creates its own arrangements. While it delves into less familiar work, the group regularly performs the work of such masters as Bach, Beethoven and Handel. ("We love that music; it has a lot to say," Young explains.)

Project concerts began in the members' own living rooms; then the group approached piano-owning friends, brainstormed, searched Facebook. Now the Project is holding its first concert in a public space: Friendship's Waldorf School (students are welcome to attend). And there's opportunity for further connection with the musicians at a post-concert reception.

Project members seek to reach beyond their own generation, keeping everyone close to this music so that it never fades away. As Young says, so much of modern life shouts for attention that quiet beauty needs to be nurtured, creating a future in which these artists can still perform, connected to people where they live.