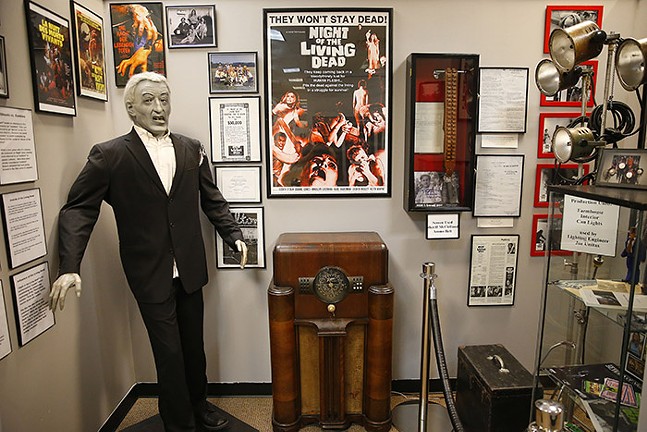 CP Photo: Jared Wickerham
The Living Dead Museum inside the Monroeville Mall
Monroeville Mall looks normal for now, with shoppers parking and making their way inside for the comfort of air conditioned retail. But in a few days, the mall will be overrun with horror fans making a pilgrimage to the historic film location for Living Dead Weekend.

Beginning Fri., July 2 and running through Independence Day, the on-site Living Dead Museum will host a slew of activities all spread over five different storefronts inside the mall. The convention will offer a vendor market and a number of celebrity guests appearances, including a special performance by cult horror icon Linnea Quigley, who starred in Return of the Living Dead, among many other titles in the genre.

The Monroeville Mall was not always a horror tourist draw, despite its decades-long affiliation with film and television dating back to being the central location of Dawn of the Dead, director George A. Romero’s 1978 sequel to Night of the Living Dead. Kevin Kriess, owner and curator of the Living Dead Museum, says former management at the mall “wasn't really keen on the whole horror movie notoriety that the mall had, and wanted to kind of bury that.”

“It was a little bit of an uphill battle,” says Kriess, who first opened the Living Dead Museum in 2008 as a toy and collectibles shop in the mall with a Dawn of the Dead tribute room in the back.

In 2013, the museum moved to another Living Dead locale, Evans City, home to the cemetery from the first film. Over the years, they expanded their exhibits and hosted events, including multiple Living Dead Weekends.

Then, as Kriess tells it, Monroeville Mall saw a change in management that was much more favorable to the site’s zombie past.

CP Photo: Jared Wickerham
The Living Dead Museum inside the Monroeville Mall
“The whole idea of indoor shopping malls was on a decline over the last 10 years,” says Kriess. “And so, with the new management, they said, ‘Well, you know, we want to do some more creative things with the spaces, and especially things that bring people in that wouldn't normally come in.’ So they started pitching us to come back.”

While he says the Monroeville Mall is in a better situation compared to other malls, with tenants still occupying most of the stores in the two-story shopping center, the space has shifted to less retail-focused concepts. For example, the former Hollister store, with its signature fake pagoda facade, is now home to Vahalla Indoor Axe Throwing. The Living Dead Museum took over a space near JCPenney, once occupied by an escape room.

The moving process began in 2019, and Kriess and his team planned on operating the Evans City museum along with the Monroeville location, set to open in spring 2020, right when the pandemic hit.

“And that changed everything because we got shut down in Evans City for a while because there was no tourism during that whole summer,” says Kriess. “And by the time we made it through the end of the summer, we'd realized that Evans City wasn't worth maintaining anymore because it was too expensive to keep renting a space there without any tourism. And we made the decision to merge everything into this new space we were already working on.”

After moving all the existing and new exhibits into the Monroeville location, they were able to finally open on June 12.

CP Photo: Jared Wickerham
The Living Dead Museum inside the Monroeville Mall
While leaving Evans City was tough, Kriess believes it ended up being a “better business move” than trying to run two separate locations. “I'm now realizing that may not have been the best way to go,” he says.

The museum also acquired the cabin and workshed set exteriors from the 1987 film Evil Dead 2. Kriess says that while the blood-drenched horror-comedy sequel was not made in Pittsburgh — it was shot in North Carolina — he believes it embodies the independent spirit of Romero and his collaborators, who made Night of the Living Dead on a low budget.

“There's a lot of parallels there and [Evil Dead 2 director Sam Raimi] was influenced a lot by George Romero,” says Kriess.

Even as the museum has expanded to represent more than the Living Dead series, the focus remains on Romero and his legacy. The museum sits across from a bust of the late director, which was commissioned by the mall and unveiled in February 2021. Kriess says Living Dead Weekend will include a ceremony renaming the court surrounding the bust to Romero Court. Representatives from the George A. Romero Foundation, a local nonprofit dedicated to preserving the work of its namesake, will also be in attendance.

While Living Dead Weekend will happen in person, COVID-19 still looms over the festivities. For one, the convention was supposed to take place in 2020 with a 1985 theme to celebrate the 35th anniversary of Day of the Dead and Return of the Living Dead, reuniting cast members from the two films. 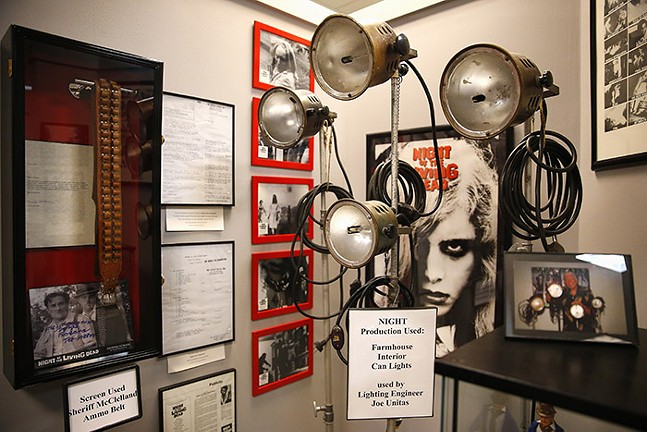 CP Photo: Jared Wickerham
The Living Dead Museum inside the Monroeville Mall
“So it's sort of a 36th anniversary, which doesn't sound as good, but we're still going with the 1985 theme,” says Kriess.

Even as the mask mandate in Pennsylvania has ended, Kriess and his staff will still wear masks, and he says unvaccinated guests will be required to do so as well.

Regardless, Kriess hopes the convention, now widely known thanks in part to popular horror fans websites like Bloody Disgusting, provides a boost to the mission of the museum and the mall, which has welcomed more local tenants in addition to the usual retail chain staples.

“When everyone saw the press and the attention and the worldwide reach that we were bringing to the mall, with customers coming from England and Japan, everyone looked at it in a whole different light,” says Kriess. “This is a beacon in the mall to bring people from all around, and then the other businesses benefit.”
Living Dead Weekend. Fri., July 2-Sun., July 4. Monroeville Mall. 200 Mall Circle Drive, Monroeville. $20-150. thelivingdeadweekend.com