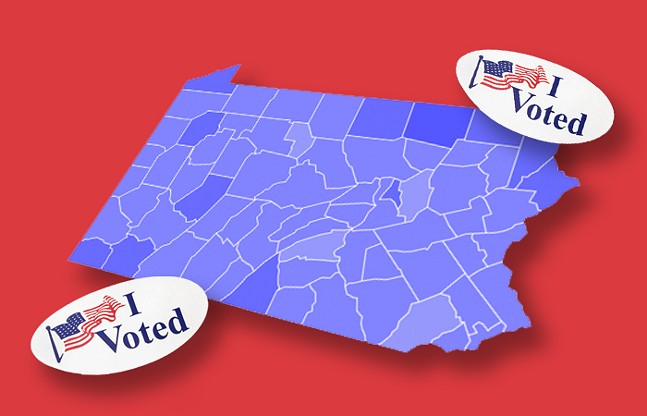 Not pictured: the City Paper staff having nervous breakdowns as they attempt to load updates into our content management system.

Welcome to Pittsburgh City Paper's live Election Night coverage. As votes are counted, we'll continue to update this page with key developments in the major statewide races as well as several local contests.

We'll also have live updates from Democratic Senate hopeful John Fetterman's campaign watch party, as our staff on the ground relay the mood on one of the nation's most hotly contested face-offs.

Scroll down to see live updates listed by race.

When should I expect results?
Polls close at 8 p.m. Each county will process and record results at its own pace. Allegheny County officials say they expect mail-in ballots will be tallied soon after voting stops. In-person votes will be tabulated by voter precinct and will continue to appear throughout the evening and potentially into tomorrow.

Pundits say that this race presents the best opportunity for Democrats to maintain control of the Senate if they can win this tight contest.

Current Gov. Tom Wolf, a Democrat, has reached his term limit and is not eligible to seek re-election. Incumbent Lt. Gov. John Fetterman (D-Braddock) is not seeking re-election and is currently running for U.S. Senate.

This race will determine who will replace Democratic U.S. Rep. Mike Doyle, who announced his retirement last fall. The Republican candidate running this year against Lee has no relation to the incumbent.

Currently occupied by Conor Lamb, who forfeited his re-election bid to pursue an unsuccessful U.S. Senate race. District includes a swath of suburban Allegheny County and all of Beaver County.

Incumbent Democrat Lindsey Williams is running for re-election against Republican Lori Mizgorski, a House member who no longer resides in the district she represents because of redistricting:

Long held by Democratic incumbent Dan Frankel, the district is considered safe territory for his party. It spans several eastern city neighborhoods, including sections of Squirrel Hill, Shadyside, and Oakland.

Once reliably Republican, redistricting has added Democratic constituencies that could make it more competitive.

District has shifted significantly East following 2021 redistricting, when Republican incumbent Lori Mizgorski was eliminated from the district by the new maps.