Little Lake's When We Are Married

When the actors were on top of the script, there was plenty of fun 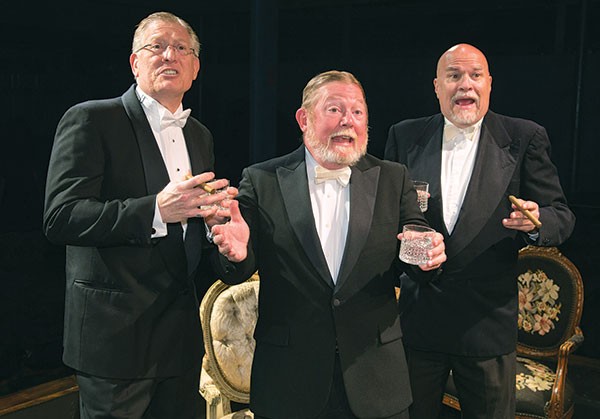 Photo courtesy of James Orr
From left to right: Joe Macerelli, Jerry Wienand and Thomas Kurt Fuchel in When We Are Married, at Little Lake Theatre Co.

WHEN WE ARE MARRIED

When you open the program and see a cast list of 15, you know that the play about to unfold was written many, many moons ago.

And so it is with Little Lake Theatre's When We Are Married. This gentle comedy by J. B. Priestley premiered in London in 1938. It's the story of three couples, all married on the same day 25 years previous, who gather to celebrate their silver anniversary.

But there's trouble a-brewing when it's revealed that the parson who married them made a clerical error, and that these six upright citizens have been living in sin. Worse still, will they agree to re-marry the spouse they've had a quarter of a century to get to know better?

Priestley's work is known for covering more substantive topics, but there's still a great deal of pleasure watching him construct a rock-solid script, diligently creating all the elements and letting the work do precisely what it's meant to.

Unfortunately, "rock-solid" isn't a term which could be applied to this production. I don't know whether it was opening-night nerves or lack of preparation, but a few of the actors in leading roles were never able to conquer their lines, and their hesitancy and confusion blunted the pace and purpose toward which director Jena Oberg was working.

But when the actors were on top of the script, there was plenty of fun. Pat Cena Fuchel, Jennifer Kopach and Jill Walters, as the suddenly single married matrons, found and played with plenty of humor. Jerry Wienand and Marianne Schaffer turned in fine performances as meek mouse and harridan housekeeper. And Dale Irvin and Eric Leslie, in supporting roles, brought interest and humor to their characters in an uneven production of a theatrical curio.