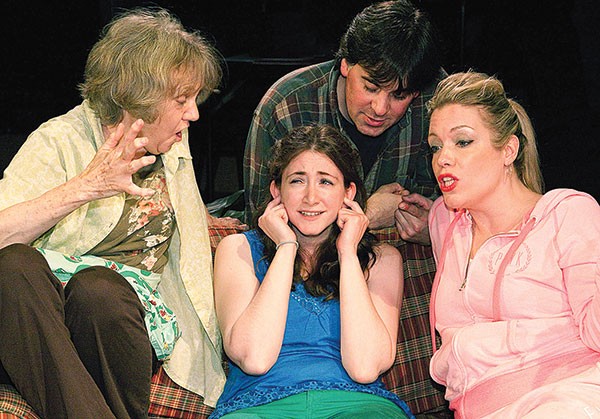 That large object hovering above Little Lake Theatre Co.'s production of Miracle on South Division Street is Disbelief, trying mightily to remain suspended. There's a good chance you won't see it up there, though, because it too often crashes through the many holes in Tom Dudzick's 2009 "comedy" about a family, its secrets and how its members have been kidding themselves.

The central story the Nowaks have been telling is about a statue commemorating the visitation of the Blessed Virgin Mary to Grandpa in his barbershop. Think that's hard to swallow? The backstory is that Grandpa and Grandma, then newlyweds, left Poland in 1942 for Buffalo. Uh-huh. By Dudzick's timetable, after Hitler and Stalin had divvied up Poland, the able-bodied young barber, living under Soviet occupation, wasn't shipped off to a work camp or the army. Instead, he and his wife left shortly after the Nazis re-invaded. So if you think WWII was a kind of cakewalk, believing that the BVM dropped by for a chat is easy.

This casual relationship with reality is no surprise. After suffering through the only other Dudzick play I've seen (Over the Tavern), I longed for the verisimilitude of Petticoat Junction. But America is the land of second chances, right? Could Miracle possibly be any worse?

In Miracle, as in Tavern, Dudzick mocks the piety of his Polish-Americans, who as adults retain the naïve Catholicism of a First Communicant, overlaid with bigotries. And instead of the stomach-pit gnawing of Tavern, Miracle delivers a sharp punch to the throat.

Disclosure: Yes, like Dudzick's characters, I grew up in a Polish-American, working-class, very Catholic family. And my choirboy brother married a nice Jewish girl — the "situation" that conjures so much "comedy" in Miracle. The congenial son is abused for daring to even go bowling with a Jewish woman, because — horrors! — their kids would be Jewish. Last century, Pope John Paul II — you know, the Polish one — condemned anti-Semitism as "a sin against God and humanity," but Dudzick and his characters remain tone-deaf to the issue.

The only virtues in Miracle are that it's relatively cheap and easy to produce (Little Lake director Jena Oberg and her team delivered a fine set, sound, lights, etc.) with loquacious if not credible roles for three women. Liz Roberts delivers her usual solid performance as the somewhat sensible daughter. Martha Bell struggles with the infantile mother who 180s her personality before the curtain falls. Jennifer Sinatra scores the most in the thankless role of the younger daughter, a stereotypical hard-edged botched-bleach-job twinkie. And Gregory Caridi copes with the closest-to-sympathetic character.

Dudzick heaps preposterous atop ridiculous for an extended unfunny ethnic joke with a reference to the Holocaust as the punchline. It would take a miracle to make this show worthwhile.