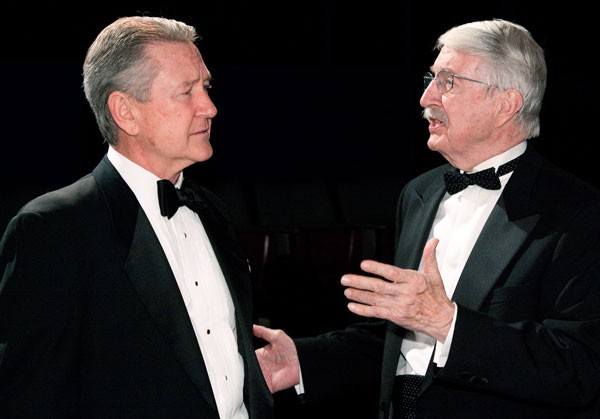 What amazing timing is Little Lake Theatre Co.'s selection of A.R. Gurney's Black Tie. In the same week that the elections caused a meltdown of conservatives lamenting "It's not a traditional America anymore," the 2011 comedy portrays that endangered species: country-club Republicans. They are gracious, fun-loving in a subdued, P.J. O'Rourke Republican Party Animal way, trying to cope with the changing demographics and culture of the 21st century.

Black Tie is told entirely from the point of view of the groom's WASP family, in last-minute preparations for the pre-nuptial festivities hosted by his parents. In discussing the bride and her family, no one ever utters or even makes the slightest hint of that preppy cliché, "Not Our Kind, Dear." But it's hard to avoid the inferences.

The story's hook is that father of the said groom, searching for the Holy Grail of toasts, calls upon the spirit of his late father, the epitome of etiquette. This occasion is very important to the entire family. His wife and daughter have labored for hours to plan a dinner that will unite the two families, bridge the gaps between generations and provide a congenial evening for all. Offstage, though, Bridezilla is hijacking her future in-laws' party for a marketing stunt. Her family and friends are selfish, surly reverse snobs unwilling to accommodate different mores. Can love conquer any of this?

Directed by Carol Lauck, the Little Lake production is nicely balanced with lots of laughs, touching sentiment and a well-chosen cast. OK, the pace is thrown off by the insertion of an intermission that Gurney neglected to provide. But it's especially fun to watch Paul Laughlin and Bruce Crocker interact, respectively, as uber-proper gentlemen-ghost and his son, who strains to follow such dignified footsteps in an increasingly undignified world. Tracey Taylor Perles and Jenny Malarky delightfully fulfill their mother and daughter roles, both coping better than the men. T.J. Firneno wraps it up as the hapless bridegroom.

Fortunately and fortuitously, Black Tie sparks with relevance, humor and a few snide insights for our times.