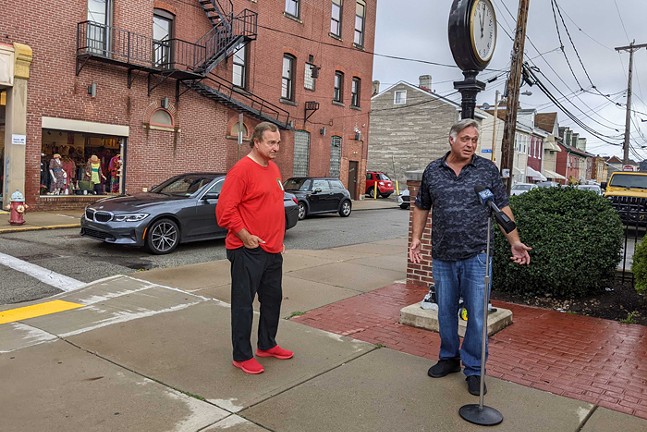 This year marks two decades for Little Italy Days, originally launched in 2002 as a small community festival and parade.

"Bloomfield is known as Pittsburgh's Little Italy, so, you know, we want to keep that tradition, legacy, and keep our roots going," said Richetti, adding that people will often come in from out of state just to attend the festival. "They call, they want to know what the dates are. They want to have their family reunion around this date and just celebrate our Italian heritage."

He adds that the festival will feature traditional Italian food "galore," rattling off dishes like spaghetti, meatballs, hot sausage, and rigatoni, as well as culturally relevant activities like the annual bocce tournament and impersonators for famous Italian Americans like singers Frank Sinatra and Dean Martin.

CP Photo: Jared Murphy
Bloomfield's welcome sign
Both Richetti and Martino emphasize that the festival will feature 30 acts playing across three stages. The event will also highlight the 50th anniversary of the former Steelers fullback Franco Harris' Immaculate Reception, a famous play that won a 1972 playoff game against the Oakland Raiders. Harris will make an appearance during the event to lead the Italian celebrity bocce team.

The last 20 years have not been without controversy for the festival. A 2019 Pittsburgh City Paper article outlined how Bloomfield residents have complained that the event has grown far too big, and "lamented the disruption the festival brings, as thousands of people from outside Bloomfield descend on Liberty Avenue to drink and party." (In that same article, Richetti said Little Italy Days attracts more than 100,000 attendees each year. At the time, fewer than 9,000 people lived in Bloomfield.)

The festival also generated controversy for an alleged incident where a Little Italy Days food vendor shouted racist sentiments at an Asian American man. Organizers have also been accused of not actually paying tribute to Italian heritage, bringing in outside vendors, and not properly supporting local businesses, including those in Bloomfield.

In 2021, one local content creator named Tad Wissel released a video documenting the 2019 Little Italy Days, complete with footage of overcrowded sidewalks, visibly drunk attendees, non-Italian food sellers, and multiple booths hocking everything from Cutco knives to insurance. The video ended with footage showing piles of garbage on Liberty Avenue left over from the festival.

Still, others express excitement over the event and support for Richetti's continued involvement. At the press conference, Martino praised Richetti, who owns an event-planning business called Big Day Entertainment, for working to bring Little Italy Days to fruition.

"The organizer of this event works on this all year," said Martino. "He's been working with city officials, with the businesses along here, to make sure it's safe, it's clean, and everybody has a great time."
Little Italy Days. Thu., Aug. 18-Sun., Aug, 21. Liberty Avenue from Ella Street to Gross Street, Bloomfield. Free. littleitalydays.com