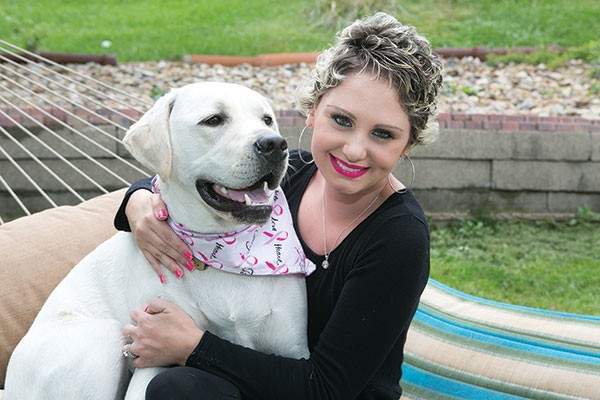 Jaggar says companies put pink ribbons on merchandise because data shows it leads to higher sales and greater customer loyalty. And she says breast-cancer-awareness advertising from corporations presents an incomplete image of the disease and tends to overly sexualize women.

“Companies are selling these cheerful stories that are inspiring and appeal to people. They’re making breast cancer feel like it is, on the one hand, an urgent threat that everyone needs to care about — a little fear-mongering,” says Jaggar. “And on the other hand, they’re making it seem like there’s an easy answer. If you just donate, more people will be aware. You can’t find anybody who isn’t aware of breast cancer. Awareness alone is insufficient to turn the tide on the epidemic.”

Still, Jaggar acknowledges that there are many living with breast cancer and those impacted by the disease who are comforted by the pink ribbon and pink products.

Among them are 12 local men who are participating in the American Cancer Society’s Real Men Wear Pink campaign. According to the campaign, in Pennsylvania alone, 11,310 women will be diagnosed this year, and 1,940 will die from the disease.

“A lot of men are affected by breast cancer — having moms and aunts and grandmas who passed away, or who have dealt with and fought breast cancer in their lives. I think all of us have a cancer story, unfortunately, in their family,” says Allegheny County Councilor Tom Baker, one of the participants. “My dad passed away when he was 39 from cancer, and my mom at exactly my age, 37, became a single mom.”

The campaign includes nine events from Sept. 30 to Oct. 18 to raise awareness about the disease, as well as funds for the American Cancer Society.

“All of us guys have mothers. Many of us have sisters, aunts, grandmothers, close female acquaintances that are like family,” says Todd McCurdy, of Watts Water Technologies. “You love them with all your heart, and to see them go through this challenge and this struggle is so heartbreaking. You feel so helpless.”

McCurdy’s wife is a breast-cancer survivor who also works for the American Cancer Society. He says he hopes the campaign will be of comfort to people living with the disease and can better educate the public about resources available to them.

Each of the participants is responsible for collecting $2,500, and the campaign’s overall fundraising goal is $30,000. The men have already raised more than $37,000 to date.

“I want my donations to go toward education and research,” McCurdy says. “But there’s got to be that financial incentive for those who work with the organization to help carry on that message. Being that my wife works for American Cancer Society, I’m going to tell you, you’re not going to get rich working for a nonprofit. The donations, the research grants, the stuff American Cancer Society has really been at the forefront of, you can tell most of the money is going toward what the mission is.”

Like many of the men in the American Cancer Society project, Diana Napper was inspired to get involved in the breast-cancer fight after her best friend, Carol Jo Weiss Friedman, died of the disease in 1990. But unlike them, she doesn’t identify with the pink brand.

“Glimmer of Hope has never been a pink organization, even before all the controversy” says Napper. “Especially with the young women, they’re very frustrated with the pink ribbon and products. But I truly won’t turn down money from anything that’s pink. Because our bottom line is, the money we gave away last year, I’d like to double that.”

Napper’s foundation funds cancer research and programs that focus on premenopausal breast cancer. This year, her foundation will distribute over $500,000 in Western Pennsylvania to breast-cancer programs and equipment purchases. The foundation has given more than $3 million for breast-cancer projects to Allegheny Health Network, Magee Women’s Research Institute, the Hillman Cancer Center and Allegheny General Hospital.

“We have an effective program. I think our transparency and the effectiveness of our program has allowed us to triple in size,” says Napper. “I want this fixed. I have two daughters. The incidence of breast cancer is too much, so I have got to find a way to help these patients get better. And [get] newer drugs, or make their treatment more tolerable, which in the end will improve outcomes, because when you’re less stressed and have less anxiety, those people tend to do better.”

Right now, Napper is working on partnering with researchers to develop a drug to treat metastatic breast cancer. She says she’d rather focus on helping the women she works with than the controversy over pink ribbons and pink branding.

“I don’t have breast cancer. Some women might find great comfort in pink, and other women find no comfort in it,” says Napper. “I always say who am I to judge. I support these women.”

Why Branding can Make or Break your Business Sponsored