Lights Out at Pittsburgh Playwrights

A drama set on a Pittsburgh subway is never dull, but it’s also never as absorbing as it could be 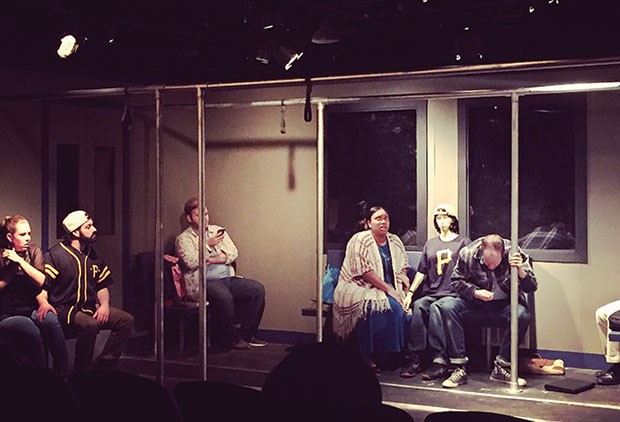 Photo courtesy of Monteze Freeland
A scene from Lights Out, at Pittsburgh Playwrights

continues through April 15. Pittsburgh Playwrights Theatre Co., 937 Liberty Ave., Downtown. $22.50. pghplaywrights.org
It’s a dark and stormy night when a Pittsburgh subway train gets stuck under Mount Washington during a power outage, leaving 10 diverse characters in search of sex, validation, redemption, heaven, a tall cold one and, in the end, an author.

Pittsburgh playwright Steve Hallock’s affable Lights Out, a world premiere at Pittsburgh Playwrights Theatre Co., directed by Cheryl El-Walker, is never dull, but it’s also never as absorbing as it could be. That’s the result, I think, more of its foundation than its potential.

The characters are pretty stock, which is fine: Egos aside, aren’t we all? But there’s a point at which you simply have to go for it, and Lights Out gets them only halfway there.

Three of the characters’ companions on the train are mannequins, and the living actors converse with them. Almost all of the characters eventually step forward into a spotlight to tell a poignant story from their pasts about another blackout they experienced, three of which involve death, and one that involves sex.

And as I watched those moments — the mannequin device was awkward, the soliloquies a mixed success — I began to wish Hallock had created one big bold abstraction, where the stranded passengers barely talk to each other (if at all), and where we hear just their intermingled inner monologues, bringing them all together and apart in philosophy and experience without their ever knowing it.

The buoyant Connor McCanlus has the most to say as a loquacious-cum-obnoxious faux-ciologist who sees his fellow travelers as lab rats for his scholarship, and who types his interpretations on a laptop, occasionally sharing his hackneyed wis-dumb in voiceover. The burly Sam Lothard delivers the most effective flashback, a reflection on how, in the dark, we can’t see our ethnic and racial differences.

But the most credible characters are the bearded guy in the Pirates jersey (Michael Lane Sullivan) and the frisky blonde (Jenny Malarkey) with whom he chats, busses and manages to arrange a dinner date. (He’s a student chef, so he’ll cook.) I don’t quite believe they’d start smooching right there on the train, but they’re still about as recognizably Pittsburgh as Lights Out gets. 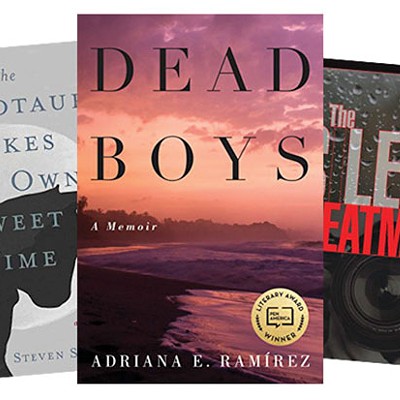