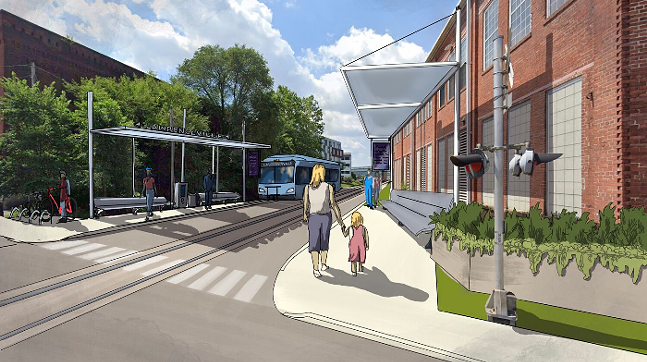 Photo: Courtesy of NEXTransit
Transit proposals in Pittsburgh are a dime a dozen, with many never coming to fruition — like SkyBus and a high-speed Maglev train. Port Authority of Allegheny County is hoping to have better luck than those other plans, and has proposed more than a dozen transit projects, in which it is seeking public input.

The Port Authority projects are part of its NEXTransit draft plan, which includes a potential gondola, aka an aerial tram, connecting the Strip District to the Hill District and onto Hazelwood; a proposed light-rail or dedicated bus line up the Allegheny River through Lawrenceville, Morningside, and all the way to New Kensington; busway extensions potentially to McKeesport and the Pittsburgh International Airport; a Downtown Pittsburgh transit center; and many other proposals.

The projects are not set in stone and many details still need to be worked out. Port Authority CEO Katharine Kelleman says they should be seen as a roadmap to a better public transit system in the Pittsburgh area.

"This plan provides a roadmap for a more accessible, efficient, equitable, and environmentally sustainable future," said Kelleman in a press release. "When more of our neighbors have reliable access to jobs, education, housing, and health care, and recreation, we all win.”

Some of the proposals may seem eye-popping for some, but before any aerial trams or new light-rail lines can be built, Port Authority must expand its existing storage and maintenance capabilities. It is proposing to do that by potentially building a new garage to store buses, light-rail cars, and other equipment, and trying to figure out the most efficient location for such a facility or facilities.

Only after this capacity upgrade, which Port Authority estimates would cost between $177-233 million, can the authority focus on other transit service expansions. One of those, aerial trams, have long been a Pittsburgh dream as the hilly geography contributes to their feasibility, but the idea has been proposed many times before and never materialized.

For the most part, the proposals are about responding to current needs or forecasting future needs due to population trends, and attempting to provide transit options to those users.

Port Authority is hosting four public meetings to gather final input before the authority board votes in September. Times and locations are listed below.
Members of the public can also provide input online at nextransit.network or in writing to Port Authority of Allegheny County, Attn: Planning Department, 345 Sixth Avenue, 3rd Floor, Pittsburgh, PA 15222.