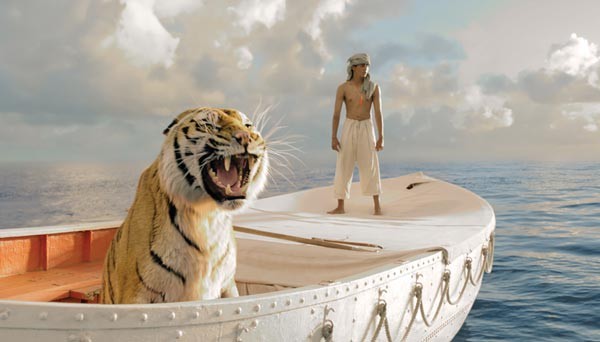 A boy (Suraj Sharma) and a tiger, afloat together

If there's anything Ang Lee can't do, and do well, then he hasn't done it yet. He's a most gifted, even daring artist, determined to create intelligence, humane yet highly entertaining commercial cinema.

In Life of Pi, Lee puts a teen-age boy in a lifeboat in the middle of an ocean with only one companion on board: a wild Bengal tiger that wants to survive as badly as he does. This sort of allegory may work as a novel (by Yann Martel), but how do you pass it off as a film? The answer: Let Lee do it. And now that I've seen it, I don't want to read it. I'm afraid it just wouldn't seem possible.

As a boy, Pi (Suraj Sharma) embraces three religions and wants to believe that all species on earth can get along under the watch of a compassionate God. His remarkable adventure aboard the lifeboat threatens to teach him otherwise. But his story is about faith, which is real, and about the syncretic (as opposed to symbiotic or parasitic) nature of life. Lee's scenes in Montreal are as simple and real as his scenes at sea are fabulist and fanciful, and together they provide a moving, absorbing, thoughtful cinematic adventure.