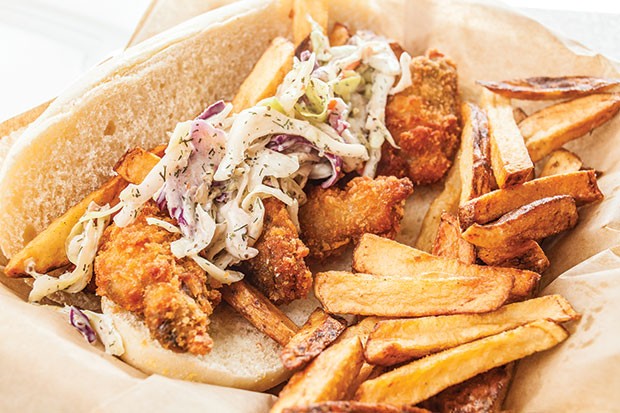 Last year, East Liberty lost an important mural of African-American children, riding their bikes and blowing bubbles, on the side of a building whose tenants wanted windows. This year, the balance tipped in favor of Wilkinsburg, which gained a mural of Flyboy, Chicago artist Hebru Brantley’s iconic superhero. A be-goggled brown-skinned boy, Flyboy soars, larger than life, across a formerly blank brick wall near the East Busway. His youth and powerfulness transcend cartoonishness; Wilkinsburg’s Flyboy is magnificent to behold.

Directly in front of Flyboy is the sign for Liam’s Fish, Wings & Things. Liam’s represents Wilkinsburg in a way that is less fantastical, but equally heroic in the way of small-business entrepreneurs everywhere, who combine idea, skill, hard work and capital to provide for a family and contribute to a community.

Liam himself is not the owner, but rather the owner’s small son, as well as the playful name for a little frog sculpture that greets customers at the counter. A former Popeye’s, the restaurant has been considerably spruced up, yet retains the layout of a fast-food place, with a counter for ordering and booths and tables for eating in. There’s also still a drive-through, and take-out must be common, since all food is served in clamshells and other to-go containers with disposable cutlery. But eat-in diners receive table service by Liam’s friendly staff. The impression we got was very much of a family affair; Liam’s baby sister even accompanied the owner when he stopped by to check on us.

Liam’s menu is simple, but not ordinary. In the fish category are perch, whiting and Asian catfish, or swai. Wings speak for themselves. The “Things” category was most interesting, including fried oysters, shrimp and frog legs. Sides ranged from the most familiar Southern soul-food classics, like green beans and macaroni salad, to those less frequently seen in the North, such as fried okra, hush puppies and, the night we visited, fried green tomatoes. Liam’s also has a liquor license and offers not only beer but alcoholic slushies, one rarer than the other at most Southern-fried restaurants around here.

Speaking of rare: frog legs! Rarer still to find them outside of the context of French cuisine, at least in these parts. We had to try them (avoiding the eyes of Liam, the metal frog mascot, as we ordered). Prepared like chicken wings, they were more than a novelty, but a delicacy all their own, thanks to a light, crisp coating; meaty, juicy texture; and slightly fishy flavor. This was not off-putting, but reminded us that we were eating the meat of a creature that lived occasionally in the water.

Chicken wings were served whole and they were great: deep golden-brown, well-seasoned, moist and meaty. By default they come simply fried with a few sauce options, including garlic-butter and a sort of buffalo-barbecue hybrid that pleasingly combined smoke and spice. The wings were so good themselves, though, that we mostly ate them straight.

We love perch, but it wasn’t available the night we dined. Swai had the paler, less hearty coating of the frog legs, which suited the mild yet meaty fish. Fried oysters were juicy enough, but their coating was bland, crying out for salt, pepper and vinegar (all of which were on hand to doctor up their flavor). A side of green beans had all the bright color and snappy texture cooked out of them (although we have family members who like them this way, so maybe that’s just us), while fried okra suffered from almost the opposite problem, the vegetable bright green within a coating too heavy and tough to allow it to shine. In all of these cases, some seasoning would have boosted flavor, if not texture.

Seasoning certainly enhanced the hush puppies, whose exteriors were deeply browned, interiors were moist and tender, and flavor peppered, literally and figuratively, with lively spices. Fried green tomatoes, too, were very good: thin-sliced, tart and juicy within their crispy sleeves. Hand-cut fries lived up to their name, their wide range of shapes betraying actual knife-work, not a prefab grid cutter, in the kitchen. This could work well, creating a range from fat and fluffy to thin and crispy fries, but in practice the variety was too wide, and a large portion of them were all crunch with no contrasting interior.

In Wilkinsburg, Flyboy soars, and next door, Liam’s is down-to-earth, serving local variations on the theme of Southern fried food in a friendly, comfortable setting.