CP Photo: Jared Wickerham
Beatrice Fadrigon
In a city that’s predominantly white, finding community with other Asian folks can be difficult. For many LGBTQ Asian people in Pittsburgh, however, there is an additional othering and discomfort in spaces that were not designed with intersectionality in mind, whether in predominantly white LGBTQ or predominantly cisgender and straight Asian spaces.

Navigating the intersections of these identities is often complicated, leading to a range of experiences for LGBTQ Asian folks that vary according to other intersections, such as age and class. Many are affected by the false choice between identifying as only Asian or only LGBTQ, which can lead to LGBTQ Asian people suppressing part of themselves. Finding other LGBTQ Asian residents, however, whether through communities they forge themselves or individual connections, helps many people create a sense of comfort, and fosters further exploration of their identities.

“When I was able to find my community of other queer Asian people, then I really was able to grow and have a support system that truly understood the multiple aspects of my life,” says Beatrice Fadrigon, a cisgender lesbian who recently graduated from the University of Pittsburgh.

Fadrigon, 22, is Filipino and one of the co-founders of Pitt Aquarius (@aquarius.pitt), an organization of queer Asian students that focuses on intersectionality. She says they wanted to create this space in part because other LGBTQ organizations were predominantly white, and they felt people in those spaces often lacked an understanding of how Asian identity affects one’s LGBTQ experiences.

Microaggressions, like being unable or unwilling to pronounce one’s name correctly, often build up, leaving many Asian LGBTQ folks feeling unwelcome or not understood in those spaces. At times, local Asian people share that white LGBTQ people also contribute to their fetishization and tokenization, particularly while dating.

“I've definitely felt like I've been overlooked because of my weight and my race and even my gender identity, the fact that I'm a kind of cross between like masc and femme, like, I don't necessarily fit into either. I definitely feel like there's a lot of gay men that are looking for someone that looks like them,” says Jake Barney, who is nonbinary and pansexual, a person who can be sexually or romantically attracted to someone, regardless of their sex or gender identity.

Stereotypes portray Asian men often as effeminate and unattractive, while women are often hypersexualized and assumed to be submissive and feminine. Both add additional discomfort for nonbinary Asian folks, such as Barney, 30, who is half-Filipino and half-white, and Alicia [not their real name], a 19-year-old half-Indian, half-white Pitt student who’s nonbinary and queer.

LGBTQ aesthetics can create hurdles for many LGBTQ Asian people because those prevailing ideals are predominantly white. To Alicia, these aesthetics rarely take into account different cultural norms and histories of gender and gender presentation. Meeting or seeing other LGBTQ Asian folks can help people feel more comfortable with exploring those aspects of their identities.

“I have two friends that are also Desi [a descencent of India, Pakisan, or Bangaledesh] and queer. And one of them is nonbinary, and talking to them and seeing them in their identity and how they were able to embrace their identity while also embracing being Desi was this sort of revelation for me,” Alicia says. “It's like, ‘Oh, other people can do that,’ like, I can be Asian, Brown, and queer and nonbinary because there's other people doing it.”

Navigating predominantly straight Asian spaces while being LGBTQ can create additional feelings of isolation, whether in peer groups where people don’t respect others’ pronouns or make homophobic jokes, or with parents and family who hold traditional and gendered expectations. For some, language barriers with family also add to the difficulty of embracing multiple identities at once.

“At this point, like, my 90-year-old grandparents, I want to be out with them, but I know that they won't understand. Like, they went through so much, it's a foreign concept to them,” says David Cui 崔潜润, a cisgender gay man. Cui, 28, is out with his immediate family but hasn’t told his extended family in China, in part because, “I don't have the vocabulary to explain it.”

But being mixed-race, especially half-white, also impacts people’s relationships to their Asian and LGBTQ identities, from dismissal from Asian people over not being Asian enough to white LGBTQ people erasing their Asian identity in favor of viewing them as white.

Age also shapes LGBTQ experiences, and for Cui, who has lived in Pittsburgh since 2010, shows like RuPaul’s Drag Race and Glee indicate a huge shift in how LGBTQ people get to see themselves relative to the hypersexualized depictions of the ’90s and 2000s. He also notes a divergence in the bars that younger versus older LGBTQ folks tend to frequent, with younger patrons often avoiding establishments that have reputations for being predominantly white.

“A lot of the more established aspect of the community, like organizations and associations and things like that, are built for white queer people,” says Alicia, who has connected with other Asian queer people through social media platforms such as Instagram and TikTok. Alicia and Cui also note that art galleries can be a place to connect with other queer people of color. 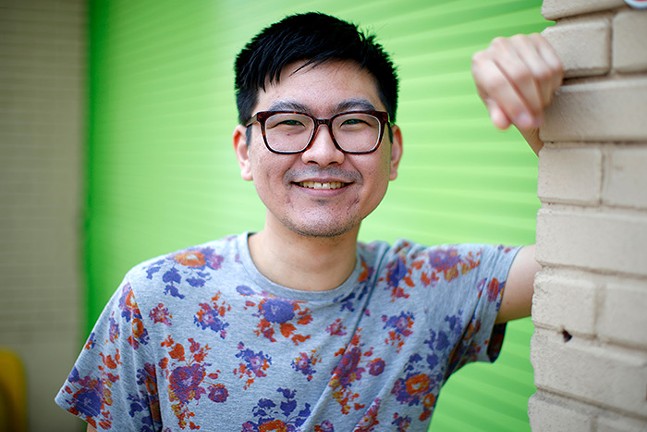 CP Photo: Jared Wickerham
David Cui 崔潜润
Existing queer Asian organizations, such as Pitt Aquarius and Rangoli Pittsburgh (@rangolipgh), are relatively new and serve specific portions of the community — students and South Asian people, respectively — leaving many to rely on individual connections as they explore the intersections of their identities. Cui and Barney say they struggle with incorporating their Asian identity into their LGBTQ identity due to pressure to assimilate into white queer aesthetics and narratives rather than explore what it means to have both Asian and LGBTQ identities.

For some, such as Angela Le, a nonbinary and pansexual Pitt student, reconnecting with their Asian identity is important especially as they grow older. Le, 20, is Vietnamese American and grew up in a predominantly white area. Their parents are also working class and had little time to pass down traditions and culture when Le was younger, making it even more difficult for them to connect with their Asian identity.

“I'm sorting through trying to be more Vietnamese now so that I can have that culture when I'm older. A lot of the people who grew up around a community, they had that growing up because they had other people — like I only had myself,” says Le.

The explorations of the intersections of these identities unfold in a variety of ways. For Barney, they include changing the kinds of food they make and focusing on cooking and sharing Asian foods as a way of showing care. While people’s relationships to their identities continue to shift and change, having support from others who understand their experiences — whether through community organizations or individual connections — helps many Asian LGBTQ folks feel more comfortable with expressing the intersections of those identities.

“These two things aren't incompatible,” Alicia says. “I've been able to much more just, like, openly talk with family members about like being queer, and in queer circles be more vocal about what it's like to be a queer person of color.”