It's no longer just a commitment ceremony for same-sex couples 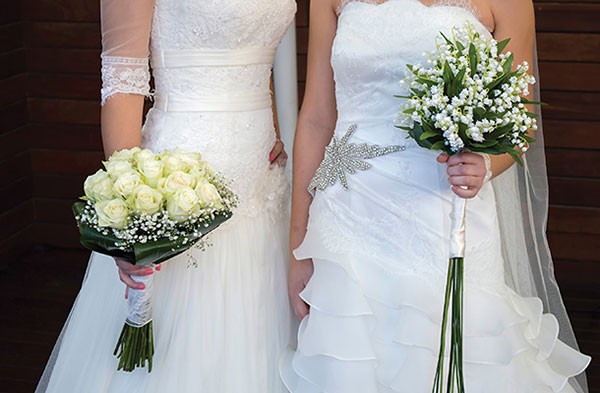 For same-sex couples, a wedding is a wedding — not a civil union, not a commitment ceremony, not a “same-sex wedding.”

According to annual surveys of thousands of LGBT couples conducted by the wedding website The Knot, 70 percent of participants called their matrimonial event a wedding in 2013. By 2015, that same distinction grew to 95 percent. And that percentage is sure to rise again considering that the data for the 2015 survey was compiled before the U.S. Supreme Court’s landmark decision granting legality for same-sex couples to marry throughout the country.

Local LGBT activist and blogger Thomas Waters says that he and his husband, Brad, consciously used the word “wedding,” as well as the terminology of “getting married” for their nuptials.

“We had already been together a very long time. We wanted to have the legal designation of [being] married. That was a primary goal,” says Waters. “When people get married, they have a wedding, right?”

But, another trend isn’t so positive: 95 percent of couples say vendors need a method to communicate that they are LGBT-friendly. Locally, Erin Calvimontes’ wedding-planning company, Divine Celebrations, has been certified by the 14 Stories Gay Wedding Institute since 2013 and proudly advertises the fact.

“It makes a statement that we are friendly,” says Calvimontes. “We took the extra step to show we are absolutely accommodating to the LGBT community.”

Calvimontes says some LGBT-wedding trends she has noticed include cocktail parties before the ceremony and more personalized weddings that showcase “who the couples really are.” She says she is noticing the latter begin to take off in all weddings.

Waters agrees: “Comparing the same-sex weddings to straight weddings I have attended in the last year, the [same-sex couples] have felt more free to mold the events to fit their style, comfort level, budget and likes.”

By Dan and Lindsey Thompson of Electric Lime Studios