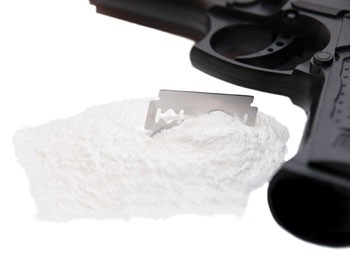 Lex is dead now,
He died in prison.
They say his heart gave away and
I'm guessing from too much of not enough.
I knew him when he was a detective.
We were so young
And were assigned to narcotics.
Youth usually is chained to ambition
And we strutted the chains cool like immortality.
We were given enough money to get killed on the street
And set out to fight the war on drugs.
We'd mostly buy oil and snow
And stolen stuff
Guns
And TVs.
Lex even bought an autographed picture of Muhammad Ali
With a letter of authenticity and certification.
You know we'd buy stupid shit.
We mostly worked alone
And into the night
In darkness to morning sun in the places where most would never go
And we learned to lie
And steal
And whore.
Lex was good
Wore gold
Pimp shoes
And broke bread and drank wine with the dope man.
We'd work the streets
Always gathering information
Of where and when but mostly who.
None of us saw
But Lex started to use the grease
And powdered his nose.
He became a junkie.
He came out from undercover
Assigned to work mostly burglary.
Lex never left the streets
And still ran the alleys.
It became crazy
He was a bad junkie and needed money.
So he started to rob banks.
They caught a picture of him
From the bank
And his partner saw the FBI picture and said,
"That picture looks like my partner Lex."
Eventually more pictures
And fingerprints from the notes passed to the teller
Matched Lex and he was arrested
And charged with bank robbery.
He asked for a jury trial
And he defended himself.
And everyone will tell you that a fool is his own lawyer.
He was found guilty
And sent away to one hundred years and a day to live behind a wall.
Not that it matters
But I can testify now that Lex was once a good cop
And a good man.
I don't believe for one second that he would have
Used the junk if he hadn't worked undercover.
I also believe that if he hadn't become a junkie
He would never have robbed banks
And if he didn't rob banks
His partner would have never seen his picture
And said, "That looks like my partner Lex."
And if there were no pictures there would have
Never been a jury trial.
And Lex wouldn't have died behind the wall.
I sometimes think of him and hear the chains of youth
And I wonder what ever happened to the autographed
Picture of Muhammad Ali.