What could he have hoped to gain from playing in the preseason? Praise from the coaching staff? A pat on the back from his peers?

Le’Veon Bell skipped training camp. It doesn’t make him a pariah. He shouldn’t be public enemy No. 1. It makes him human.

I was at the Steelers’ training camp. It rained every day. By the final day, it smelled like a wet frat party.

I suppose being around sweaty men is part of Bell’s job description. Bunking with said sweaty men, though, isn’t fun. Unless you’re Joey or Chandler on Friends, you don’t need to have a roommate when you reach the real world. Bell didn’t need to be playing Bert to Antonio Brown’s Ernie. The strip club in Miami seems more his style. Also, had he gone to camp, Bell would have missed Gucci Mane’s performance at Lollapalooza.

I was there. The games were boring. Like, Pirates-playing-Royals-in-September boring.

What could Bell have hoped to gain from playing in the preseason? Praise from the coaching staff? A pat on the back from his peers? A gold star sticker, cookie, and juice box after the game? He chose to stay in Florida, where the oranges are as fresh as he is hoping to keep his legs.

Fellow running back Derrius Guice of the Washington Redskins blew out his knee this preseason. Bell likes his knees. And they’re still intact.

I was there. James Conner did fine. The Steelers don’t need Bell … yet.

Rumor has it that Le’Veon Bell is a hell of grill master. Had he shown up on time, Bell would have missed a chance to show off his skills at his Labor Day barbecue. Playing corn hole is much better for his health than trying to run through a hole into 300-pound defensive linemen.

As the weather turns in the north and we all start wearing flannel and drinking pumpkin-spiced-macchiato-cappuccino-espresso from Starbucks, Bell’s working on his tan in South Beach. Halloween’s right around the corner, and Bell has to decide whether he wants to dress up like a good teammate or attend an elaborate Miami costume party. 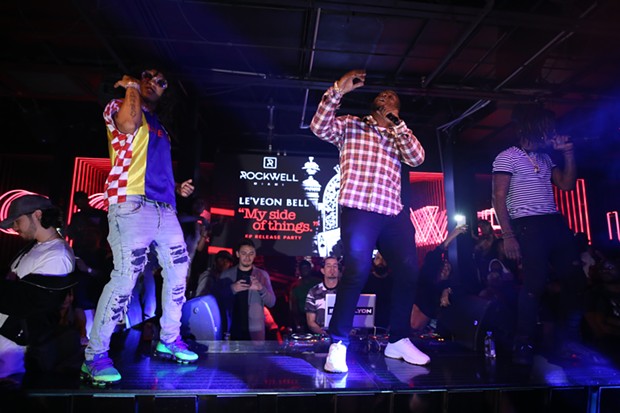 Photo: Seth Browarnik/WorldRedEye.com
Le’Veon Bell performing at “My Side of Things” EP-release party at Rockwell Nightclub in Miami Beach on Mon., Sept. 17, 2018

But Bell has also skipped the real season (so far). I don’t what that makes him. And I don’t know when Bell will show up at the UPMC Rooney Sports Complex.

All I know is Bell has to consider all the things he could miss if he does report to work.

Adam Crowley: The Steelers have a Football Jesus