Theater-craft, not straight story-telling, is the point of Peter Shaffer's comedy 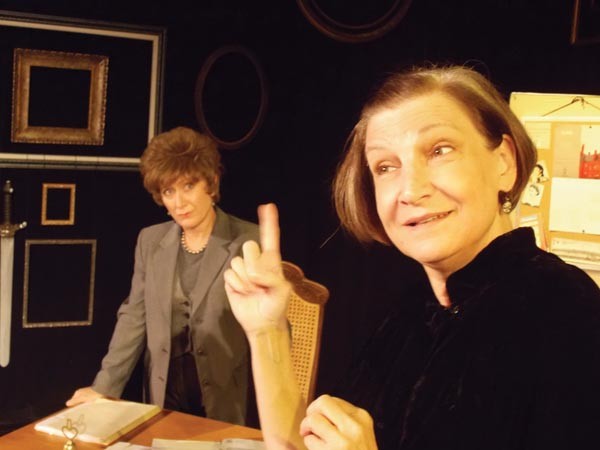 Peter Shaffer's plays tend to be massive, dense and demanding, so it takes a certain amount of chutzpah for a small company to tackle one. The knighted playwright of Equus and Amadeus also produced a rare comic gem. His 1987 Lettice and Lovage, written for Maggie Smith (a great Dame herself), is as highly charged as his testosterone-drenched classics, but comfortably within the reach of Terra Nova Theatre Group's capabilities.

Director Mark Stevenson keeps the pace brisk and the staging intimate, but vivid and colorful, to match the flamboyance of the eponymous leading lady. Lettice is a most unlikely character, with an incredibly theatrical past and a shaky present with difficulty holding a job. Over an alcoholic brew of her own design (that's where the lovage comes in), she makes an odd but enduring friendship with the more normal-seeming Lotte. (FYI: Lovage, a salad herb that tastes like celery, was supposedly named "love parsley.")

The rollercoaster plot gives the ladies a chance to chew scenery in great big gobs while luxuriating in language. As the title character, Susan Martinelli is consistently and constantly "on" in the Shakespearean mode of speaking and gesturing. But Allison Cahill also casts a strong shadow as the reality-bound Lotte. At first clashing over histrionics and history, the two create a marvelous portrait of female friendship and aesthetic passions.

It's no surprise that I have a certain sympathy, not to say affinity, for tales of Ladies of a Certain Age who aspire to be Larger Than Life. Theater-craft, not straight story-telling, is the point of Lettice and Lovage — trills rather than thrills.