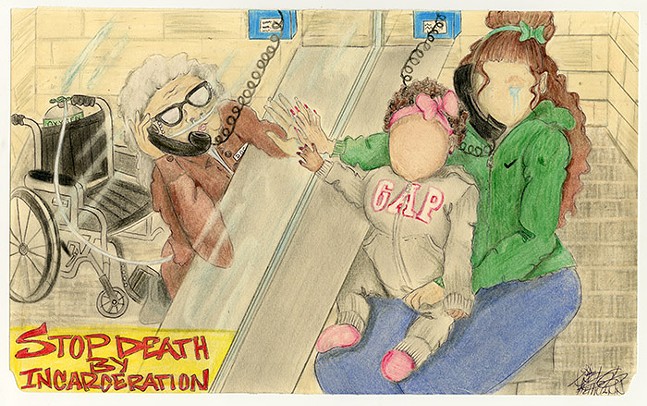 Photo: Courtesy of Let’s Get Free
End Death by Incarceration by Angela Hellman, 2020; colored pencil on a manila envelope
Prison art programs are hard to come by, especially if the particular prison houses women. Avis Lee knows this well as a formerly incarcerated person at SCI Cambridge Springs, a women’s state prison in Mercer County.

“It's, ‘What can we do for the men?’” says Lee. “And at the end of that, right before everybody gets ready to shuffle their papers together and get up and walk away from the meeting table, they're, like, ‘Oh, yeah, and there's two women's prisons, let's just see what we can do for them. Let’s let them have pink yarn in addition to yellow.’ And then the meeting’s over.”

The lack of art supplies is just one of many ways Lee says the prison system discriminates against certain groups of incarcerated people. For years, she has fought for the rights of women and trans people inside prisons as the re-entry coordinator and co-founder of the Pittsburgh-based group Let’s Get Free, along with fellow co-founder etta cetera.

Now Let’s Get Free is accepting submissions for the fifth iteration of its annual art show, titled Empathy is the Seed, calling on artists in and outside of prison to contribute their work. For the first time, the organization is also calling on poets to submit.

“We just want to be expansive because not everybody is a visual artist,” says cetera.

The submission process continues through Mon., Aug. 30, and will be followed by an exhibition taking place later this year at the Brew House Association in the South Side.

This year’s show is themed EMPATHY is the seed, TRUTH is the water, SOLIDARITY is the bloomage, a saying cetera credits to Kempis “Ghani” Songster of the Redemption Project, an organization connecting former felons to employment through education and mentorship. “We were enamored with the poetry of it,” says cetera.

Founded in 2013, Let’s Get Free is described on its website as working to end death by incarceration, a term referring to life without parole sentencing. It also helps “build a pathway out of the prisons back to our communities through commutation reform, support successful possibilities for people formerly and currently incarcerated, and shift to a culture of transformative justice.” 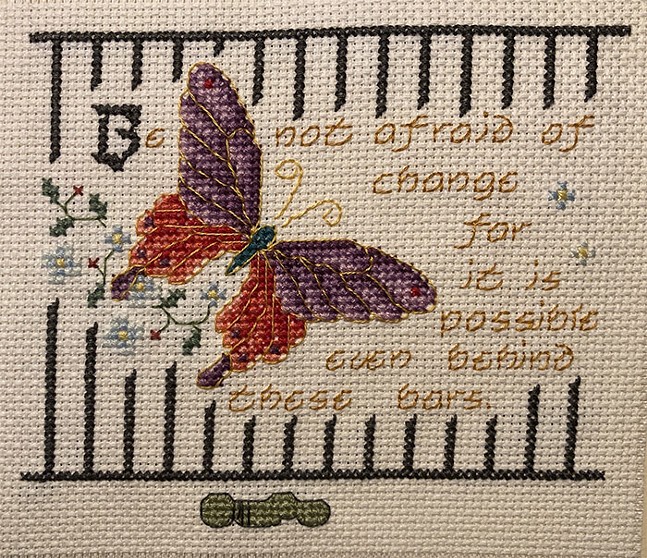 Photo: Courtesy of Let’s Get Free
Be Not Afraid to Change by Latosha Gross, 2020; cross-stitch
The group started after cetera connected and became friends with Lee, who was serving a life sentence for a second-degree felony murder charge related to an incident that happened when she was an 18-year-old college student. Lee, now 60, has since had her sentence commuted and was finally released in February 2021.

According to the Abolitionist Law Center, which followed the difficult, years-long process to commute her sentence, Lee was serving as the lookout on a botched armed robbery outside the Pittsburgh Athletic Association building in 1981.

As cetera points out, Lee’s story, as well as the stories of other former and current inmates working with Let’s Get Free, highlight how little support is given to incarcerated women and trans people, particularly those who are Black. While art may seem like a strange avenue, the show provides a way to explore the clear disparities between incarcerated men and those who are female or trans, as well as provides a creative outlet for those inside prisons.

“If you see the artwork that comes in from the prisons, the women are painting and drawing on the backs of manila folders, whereas the men have canvases and stuff,” says cetera. “And that’s because they have more family support because a lot of the people who support people in prison are women. So women have less support in general.”

Lee expands on this, recalling her time in a co-ed prison where she observed how incarcerated female and trans people were treated differently than men.

“I felt like they were respected more,” says Lee. “They were spoken to differently, for sure, with just a kinder, more respectful tone. I've definitely seen where trans people have been totally discriminated against, just with their peers in general, who will make nasty comments about them. At the medical department, when they were trying to get their hormones, or get prescriptions renewed, or get levels checked. A lot of people were really judgmental towards them, trans men and trans women.”

The art show would also serve to highlight the racial biases in the incarceration system, with cetera pointing out how 70% of people sentenced to life without parole are people of color and Black people.

“I've often wondered if Avis was white, if she would have even gotten a light sentence,” says cetera.

Besides organizing the event, Lee has also participated by submitting cross-stitch pieces. Submissions are open to all types of art, evident in past shows that have included everything from painting, illustration, and drawing, to ceramic jewelry and weaving.

Photo: Courtesy of Let’s Get Free
Regret by Todd "Hyung-Rae" Tarselli, 2021; made with coffee, white pencil on a brown paper lunch bag
This year, cetera says they already received a cardboard sculpture from a trans incarcerated person in Minnesota, which also speaks to their continued efforts to expand their outreach. This is accomplished through a number of methods, including networking, advertising in the magazine Prison Legal News, and sending mailers.

Besides accepting poetry, another new aspect of the show this year is that it’s a contest where contributors can win $100 prizes in various categories, or prison art supply scholarships.

As a fundraiser, cetera says the show serves as the organization’s primary source of money for the whole year. In the past, she says the show has raised up to $5,000, and any money raised goes towards various operational costs at Let’s Get Free, such as transportation for prison visits, as well as direct relief for incarcerated people. They also hope to fund a billboard campaign.

While the show fulfills many roles in Let’s Get Free’s mission, this year it holds particular significance for Lee.

“Well, I'm excited that this is the first year I'll actually be able to attend the art show in person,” she says.Let’s Get Free’s “Empathy is the Seed” art show submissions.
creative-resistance.org/empathy-is-the-seed-art-show