For decades after the upheaval of 1960s urban renewal, Pittsburgh neighborhood identities stayed pretty static. Other than steel-related decline and the South Side's gradual rise from the ashes, if you knew the city in 1975, you pretty much still knew it in 2000.

But that's all changed now. It's still changing, in fact, so fast that we can hardly keep track of the formerly moribund neighborhoods morphing into red-hot markets for housing and hipster storefronts. The latest sparks seem to be igniting in the agglomeration of southern neighborhoods lately united under the name "Hilltop" — the South Side Slopes, Mount Washington, Allentown, and vicinity. With visionary ideas like the Hilltop Urban Farm transforming the site of a former public-housing project, plus the wave of new housing pushing up from the South Side Flats to the Slopes and the ascendance of Grandview Park, the Hilltop is experiencing a surge of creative investment not unlike that which took Lawrenceville by storm 15 years ago.

And so we arrived at East Warrington Avenue to eat at Leon's Caribbean Restaurant. It wasn't hip and it sure wasn't fancy — just a couple tables, a take-out counter and a matter-of-fact menu board — but it's just a few blocks from the great unsung Grandview Park, and a sunset picnic beckoned.

Photo by Heater Mull
Tender, buttery shredded cabbage worked well as a side

Leon's menu consists of the usual Caribbean array of curried and jerked meats and seafood, peas and rice, and fried plantains, plus a couple dishes we hadn't tried before, like steamed fish in pumpkin sauce. We ordered a lot — more, as it turned out, than we knew, since Leon's modest prices belied its generous portions. Our Styrofoam containers strained under their loads.

The beef and chicken patties were standard fare, with a slowly building spice, but Jason was a bit disappointed that the crust wasn't even a bit flaky.

Escoveitched chicken, on the other hand, was fantastic. Fried wing pieces were soaked in a tangy vinegar sauce studded with lightly pickled onion, pepper and carrot strips. The vinegar canceled any crisp in the chicken's crust, but the very worthy trade-off was that it had been absorbed through the skin into the meat, adding plenty of punch to every bite.

Jerk shrimp wasn't so successful. The smallish shrimp were plump enough, but they took on none of the flavor of the jerk sauce, which was hot with notes of warm spices like allspice and cloves, but somehow, nonetheless, kind of bland, as if the flavors hadn't had a chance to sink in. Classic jerked meat is dry-rubbed or marinated, but here it seemed that cooked crustaceans were merely dunked in sauce, meaning there was little opportunity for them to absorb the flavors. 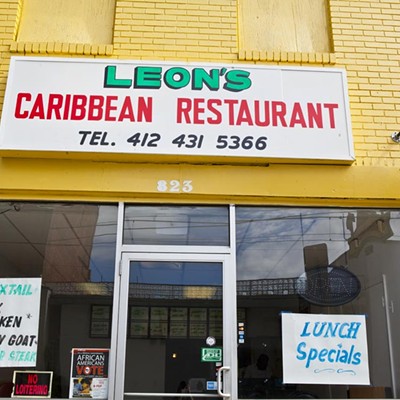 Back in the plus column, however, the fish in pumpkin sauce was a stand-out. For this dish, we ordered red snapper, and were delighted when a whole, steamed fish was delivered in a light gravy accented, not dominated, with flecks of pumpkin. The effect was just to add a little earthy balance to the succulent seafood, which rightfully retained center stage. The "peas" (actually, beans) and rice that came with both fish dishes served as satisfying sops to the sauce.

Ultra-tender oxtail reposed in a thick, mahogany-brown sauce that looked a bit like the jerk sauce, but had a touch of sweetness and little heat. Tender, buttery shredded cabbage worked well as a side, a deferential but not too reserved companion to the rich main dish.

Entrees were also served with a square of sweet, firm cornbread that was suitable as dessert after milder dishes but served equally well as a balm for spicier ones.

Caribbean restaurants in Pittsburgh have come and gone, perhaps not surprising considering our geographical distance from the source. But Leon's timing just might be right, and its food satisfactory enough, for it to prosper as the Hilltop rises.