A local production of the Broadway hit falls short. 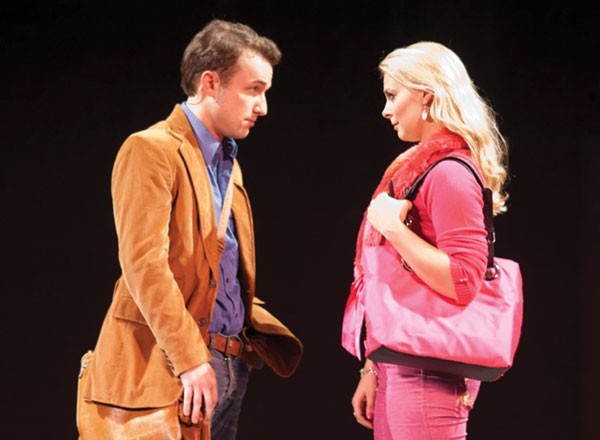 continues through Sun., May 13.

Marvin Gaye and Tammi Terrell were wrong — sometimes there are mountains high enough.

Just back from the Pittsburgh Musical Theatre production of Legally Blonde: The Musical, and if I'm exhausted I can't imagine what the cast and crew must feel like right now.

Based on the 2001 movie, the show tells the story of the relentlessly sunny and sexy Elle Woods. She is dumped by her boyfriend, who, on his way to Harvard Law School, decides he needs more "suitable" wife material. As pink in her outlook as she is in her wardrobe, Elle decides to go to Harvard as well and, over the course of two acts, learns about more than just the law.

With music and lyrics by Laurence O'Keefe and Nell Benjamin and a book by Heather Hach, Legally Blonde is like someone blowing a big piece of bubble gum right in your face, popping it and starting over again. The show seems to suggest that being beautiful, young and filthy rich doesn't matter; men really want intelligence. (Which explains why all those middle-aged men divorce their first wives to stalk Ruth Bader Ginsburg.) If the show weren't so loopy in its outrageous politics, it'd be offensive — but it is, so it isn't.

But back to the PMT production, directed and choreographed by Colleen Petrucci and starring a very, very game Lara Hayhurst as Elle. This show turned out to be a mountain too high for everyone involved.

I saw the production on opening night, and I've no doubt the enormous number of technical mistakes will be fixed by the time you read this. But we're still left with a physical production that, by financial necessity, is so scaled down it's almost painful to watch. I'm not a big fan of opulent sets — and I applaud PMT's mission to bring affordable theater to Pittsburgh — but the world Elle lives in has to be as glittery and bright and beautiful as she is ... which this isn't.

Longer rehearsals, several more seasoned performers, better sets and costumes and a working sound system — maybe then this production will reach the summit.