The plot actually wants you to like it — and you will. 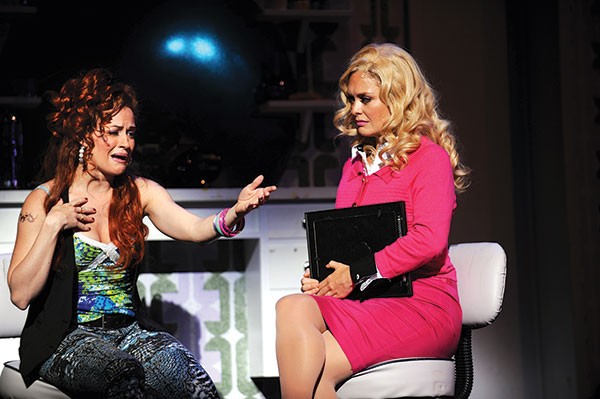 Gentlemen prefer blondes, the most famous fictional one being Lorelei Lee. In 2001, along came the next-most-famous, Elle Woods, in the film Legally Blonde, which was made into a Broadway musical six years later.

A college senior and sorority president, Elle has a 4.0 in fashion merchandising. She lives in Malibu next door to Richard Simmons, has a rich tan, a richer bank account and a Chihuahua named Bruiser, who is so lovable he probably poops gold.

And then there is Warner Huntington III, who Elle assumes will marry her. But one night he drops her, claiming he needs to become more serious since he's off to Harvard Law School.

Classmates find her a joke, Warner admits he is engaged to another student and Elle is tossed out of her first class. Then she meets The Hair Affair owner Paulette, under whose guidance Elle returns to school. To give away much more would ruin a plot that actually wants you to like it. And you will. Heather Hatch's book and Laurence O'Keefe and Nell Benjamin's music and lyrics fail to bore, but it's not until Act II that the entire sugar-coated show finally pulls itself together like a tight-fitting pink teddy. There's murder, gay people getting outed, a jailhouse exercise class that could be rated X, and a successful conviction by someone very legally blonde, who reveals a shocking blonde highlight.

In the new Pittsburgh CLO production, Kathleen Elizabeth Monteleone makes Elle's comical tragedies and triumphs so heartfelt that she never looks or comes across as foolish. The show, directed by Charley Repole, does feature two dogs: the Chihuahua (played by Chico) and Paulette's English Bulldog Nellie (played by Rufus). Sadly, each dog has no more than one minute of stage time.

Diamonds may be a girl's best friend, but for Elle Woods, the due process is simply being yourself.