"I think in the South, we have a tendency to try to be very polite." 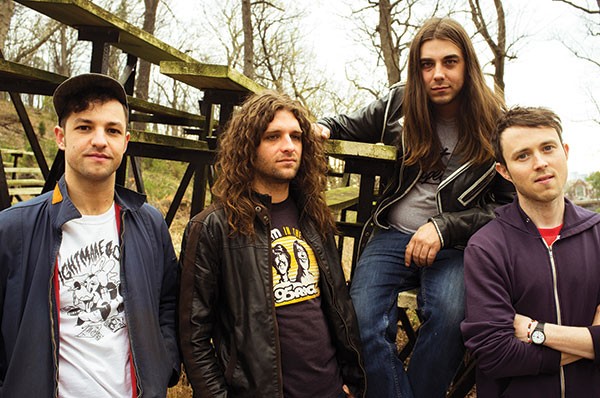 "I think in the South, we have a tendency to try to be very polite," says Lee Bains III. "Sometimes at the expense of saying what we really feel."

It's into that climate that the Alabama-born Bains emerged with his band, The Glory Fires — but their new full-length, Dereconstructed (released on Sub Pop), is anything but polite, and puts an unexpected spin on Southern rock. Bains is unapologetically progressive in terms of politics, and the band's music bridges the gap between Skynyrd and punk rock. It makes for an unexpected listen: riffs straight out of the Southern-rock playbook, with lyrics questioning aspects of Southern culture, from the legacy of slavery and Jim Crow to widespread religious intolerance. It's straightforward and honest, and as a Southerner, it made Bains a bit uneasy.

"I have a friend who I share my writing with all the time," Bains says. "And when I wrote this record, I was nervous about even sharing it with him." But, while it might have been easier to lay the politics aside and make a party-rock record, he says the route he took was simply honest.

On Dereconstructed — a telling and loaded title alluding both to the politics of the post-war South and to literary theory — Bains attempts a difficult task: determining which Southern values to carry with him, and which to discard.

There's a spirit of rebellion on the record that recalls outlaw country; on the title track, Bains sings, "They wanted meth labs and mobile homes / They wanted moonlight and magnolias / We gave them songs about taking your own damn stand / In spite of those who'd define and control you." But earlier in the same song, he recalls: "We were whooped with the Good Book / Wound up shamed, sorry and worse."

Christianity is a topic of special concern to Bains; he was brought up in the church like so many in the South, went through a period of questioning, and settled into a revised version of religion. "I'd still call myself a Christian," Bains says. "But what that means to me now is very different from what it meant growing up."

Seven of the 10 tracks on Dereconstructed mention Christianity or Christian themes and images explicitly. Pilate makes an appearance on track one; the song "What's Good and Gone" starts, "In the beginning was the Word and the small naked Earth heard it." Biblical imagery is part of Bains' milieu, and throughout the record he brings us into his world time and again. But he's not Pat Robertson or Joel Osteen, flaunting his piety for us to admire; he's Flannery O'Connor, quietly allowing his religion to inform his work.