“Mix and match and really think out of the box and play with it.”

During the decades Richard Parsakian has been in the vintage-fashion business, he’s seen many similar stories play out. But there’s one that really irks him.

“A lot of the times, people come in, they try something on, and it looks incredible on them and they say ‘I have no place to wear this,’” says Parsakian, owner of Eons Fashion Antique, a vintage clothing and accessories store in Shadyside. “I don’t want to hear that anymore. Be brave.”

With the holidays approaching and many people wondering what to wear to the upcoming parties on their social calendars, City Paper talked to Parsakian about how to wow this holiday season.

“Be brave,” says Parsakian. “Don’t worry that this is Pittsburgh. Have fun with it; don’t be so serious.”

The holidays are definitely a time for dressing to the nines and going all out, so Parsakian says it’s the perfect occasion to add some sparkle to your outfit.

“If you’re wearing a plain dress, a great pair of statement earrings or a statement necklace gives it a nice pop,” Parsakian says. “It doesn’t always have to be a sequin dress; it could be your accessories.”

But that doesn’t mean you should overdo it. French fashion designer Coco Chanel was famous for saying that people should look in the mirror before they go out and take off one accessory. That advice is a cliché for a reason.

“I usually scale back a lot of people when they come in. I try to make them look incredible as opposed to too much. That’s why statement earrings are good with no necklace,” Parsakian says. “Trends usually follow the red carpet. You might not be wearing a $5 million pair of earrings, but you can still have that sense of a Hollywood starlet, if you have a sense of design and not overdoing it.”

For work holiday parties, Parsakian doesn’t advise toning your look down. And if your work party is straight after your usual 9-5, he says it’s important to plan accordingly.

“If you’re working and then you have to stay for the party, you have to go from day to evening,” Parsakian says. “You can bring a great sequin top or sweater to go over what you have.”

Parsakian says you should broaden your horizons beyond the typical red-and-green dress commonly donned during the holiday season. He’s not fan of those busy holiday sweaters either and says they should be reserved for “Ugly Sweater” parties only.

“Please, those Christmas sweaters, there’s a place for them,” says Parsakian, “but it’s just that one party.” 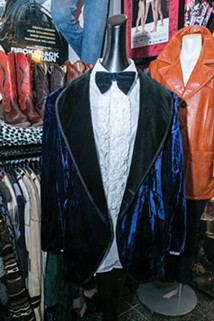 Vintage stores like Parsakian’s are a great place for people to switch up their styles and try something new this holiday season. And if you wear something vintage, there’s less worry that you’ll show up to a party wearing the same outfit as someone else.

“Everything is one-of-a-kind so you won’t go to a party and see anyone else wearing the same thing,” Parsakian says.

For men, Parsakian recommends a brocade jacket or an unusual tuxedo jacket. As of this writing, Eons had a blue-velvet tuxedo jacket that would add an extra element to any holiday party outfit.

As for Parsakian: “When I dress up, I don’t mind doing leather pants with tux tails,” he says. “Mix and match, and really think out of the box and play with it.”

Q and A with Image Consultant Sonia McKoy