CP Photo: Jared Murphy
Dippy the Dinosaur statue in Oakland
Anyone who’s traveled through Pittsburgh's Oakland neighborhood has likely seen Dippy the Dinosaur guarding the corner of Forbes Avenue in front of the museum and public library. Sometimes he’s wearing a scarf, sometimes he’s wearing a hat, and recently he’s even worn a mask to stay safe during the pandemic.

But Dippy’s namesake, Diplodocus carnegii, has a much more complicated and dramatic history than the statue that has become a mascot of the Carnegie Museums of Pittsburgh. Author Tom Rea details that history in Bone Wars: The Excavation and Celebrity of Andrew Carnegie's Dinosaur, whose 20th anniversary edition will be released Tue., Sept. 14 from the University of Pittsburgh Press.

Typically, the Bone Wars refers to the larger dinosaur-related dispute between Edward Drinker Cope and Othniel Charles Marsh, but Rea instead digs into the history of Diplodocus carnegii — the skeleton that the Dippy statue was modeled after — as an entry point into the evolution of scientific thought regarding dinosaurs and the duplicitous deals, greed, and hubris that permeated the early years of bone hunting. 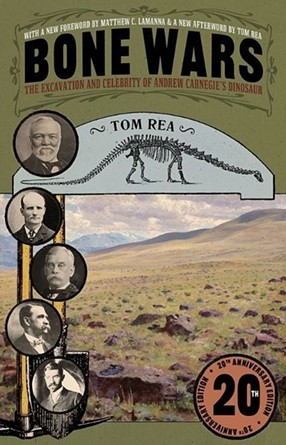 Image: courtesy University of Pittsburgh Press
Bone Wars: The Excavation and Celebrity of Andrew Carnegie's Dinosaur
Other historical figures, such as King Edward VII of England and Kaiser Wilhelm II of Germany, make appearances in the book due to Dippy’s growing fame as one of the first complete dinosaur skeletons people had the opportunity to see.

The book will feature a forward by principal dinosaur researcher Matthew C. Lamanna, who is an associate curator and the head of vertebrate paleontology at Carnegie Museum of Natural History. Rea, a Pittsburgh native who now lives in Casper, Wyoming, will also provide a new afterword.

Rea will also appear in conversation with Lamanna in Pittsburgh Arts and Lectures’ Made Local series Thu., Sept. 23. The virtual event, free with registration, will begin at 6 p.m.