Leaks in the System

Some PWSA customers say new water meters are all wet

But in the past three months, when the software component of the new AMI was implemented, some residents in Mount Washington and other Pittsburgh neighborhoods say they began experiencing problems with the water authority.

In Mount Washington, recent spikes in water usage have distressed some residents, and communication issues between residents and PWSA have caused further concern.

This year, some residents began receiving estimated water bills because the AMI system doesn't yet work for approximately 3,500 customers whose homes have older meters that cannot be read by the new technology.

PWSA has asked for residents' understanding while it transitions to the new system. But the authority has also claimed that the spike in water usage some customers are experiencing isn't related to the new system. 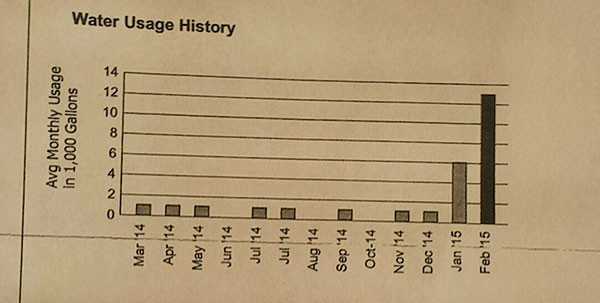 A graph from Lucinda Wolff's most recent water bill shows an increase in usage.

After Pittsburgh City Councilor Theresa Kail-Smith was flooded with complaints about PWSA, she hosted a meeting between the water authority and a few of the affected residents.

"The complaints were very broad. It seemed to be concentrated in the Mount Washington area, but then as we started getting additional phone calls, we realized there were issues in other areas," says Kail-Smith. "There's just been so many."

Some of those complaints include: higher bills due to higher-than-usual water usage; bills not being delivered; and extended wait times when calling customer service.

At the meeting, on March 18, Kail-Smith asked PWSA to stop sending out shut-off notices to people who have not paid increased bills, or who have not received their bills at all, until issues are resolved.

"It's startling when you hear these numbers," says Kail-Smith. "When I started hearing these stories, I thought, 'There's definitely something wrong here.'"

According to PWSA spokesperson Melissa Rubin, the increased bills are the result of leaky pipes possibly exacerbated by cold temperatures over the winter, not faulty water meters or glitches in the new system. But she advises anyone experiencing a problem to call customer service.

"There are a variety of issues that can cause someone to have a higher-than-usual bill, and it's not necessarily due to the conversion or the new equipment," Rubin says. "They could have a problem inside of their home, especially in the winter."

"Estimates are based on each individual customer's history of usage," Rubin says. "The first thing I would tell someone if they say their bill is wrong, is they should look at whether it's an estimated bill or actual. If it's an actual bill they're receiving, and it's higher than normal, it's very likely they have a leak inside their home."

But inaccurate readings from advanced meter-reading infrastructure are not unheard of. In recent years, problems with smart meters have been reported in cities in Washington, Michigan and New York.

And water meters manufactured by Sensus USA Inc., the company that manufactured Pittsburgh's newly installed meters, were found to be defective in Phoenix, and Faribult, Minn.; there, the cities lost money because the meters were not reading accurately.

Lucinda Wolff, of Mount Washington, says she has been experiencing two of the most common problems cited — reported increased usage and late-arriving bills.

"The problems started this new year," Wolff says. "Maybe if they get swamped with thousands of complaints, they'll correct it."

For the past three months, Wolff's water bills have been mailed to her late. Her February payment, for example, was due on Feb. 22, but she didn't receive a bill until Feb. 28. As of March 23, she still had not received this month's bill.

At her son's house, bills have been arriving but are greatly increased from average usage over the past three years. According to her records, her son's water bills have averaged between $20 and $50. But his February "estimated" bill was $109.77, and his March "actual" bill was $221.69.

"The customer had [two] consecutive estimates in the system followed by an actual reading. The estimates were comparable to their previous months' usage," said Rubin, after reviewing the usage at Wolff's son's home on Clarence Street. "During the estimated period, the customer had increased consumption that became evident when the actual reading was received."

But Wolff says water usage has not increased at the home, and their inspection of the water meter showed there are no leaks.

"This is not just one or two or three people," Wolff says. "It's a bigger issue, and they just don't seem to grasp that, or they don't want to. It's ridiculous."