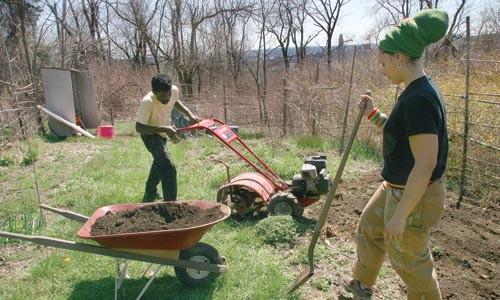 For years, Maria Graziani has been working to establish Healcrest Farm on a Garfield hillside. Now all her work may be about to bear fruit -- or more precisely, herbs and vegetables -- for the East End community she hopes to serve.

If, that is, she can clear away the property's legal thickets.

For the past two summers, Healcrest has produced enough for sharing among the handful of teen-age interns who helped cultivate the tiny 1.7 acre plot. But this summer will mark a key transition for Healcrest. After serving mostly as a fecund backyard, the farm is poised to become a full-fledged market garden -- one that can yield cash crops for sale to local restaurants and households.

So instead of tilling the soil, these days Graziani is spending quite a bit of time surveying neighborhood restaurants and ethnic food markets. She wants to see what produce is being shipped in from afar, in hopes that she might be able to offer it locally at a cheaper price.

"We want to know what is needed in the community, what are the gaps in the market we can fill," says Graziani. "We're filling a niche in the market." The results of her "pre-survey" show that among the most sought-after products are okra, thyme, green pepper, burdock roots and calalloo (a form of spinach used in Caribbean dishes).

More hard work will be needed before the farm yields food safe enough for sale, says Graziani. Soil tests show that a portion of the plot contains high levels of lead and arsenic. She estimates that remediation -- cleaning up the soil for cultivation -- would take up to a year. She plans to put on fresh layers of compost and plant cover crops whose roots would capture the pollutants. She will also unleash certain beneficial bacteria, which either digest or bind the toxins, to help in the clean up job.

But the biggest challenge so far, Graziani says, is sifting through the legal problems in order to acquire the land. Healcrest has been operating informally on these plots, but turning it into a commercial operation requires more lasting arrangements. The farm spans 19 lots, and as with many vacant lots in city neighborhoods, gaining control of them is a challenge. Some are owned privately, others are held by the city's Urban Redevelopment Authority. Still others are in the midst of the treasury-sale process, due to back taxes.

Graziani lauds the support of the Bloomfield-Garfield Corporation, a community-development group that seeks to reuse the area's vacant lots. Still, she says, acquiring the land has "been the hardest part" of establishing the farm. She's already spent the past two years trying to clear the titles to seven of the lots, for which she has shelled out $500 apiece. Graziani says she's confident about closing the sales soon -- though the final costs have yet to be determined. She's also pursuing ownership for five other lots.

Graziani didn't set out to be Healcrest Farm's sole landowner; her ideal still is to create a farm co-cop with interested parties each purchasing a stake. But it's hard enough acquiring land from multiple owners; having multiple buyers as well has proven to be messy, if not totally unworkable. Others will be invited to buy into the operation down the road, she says, but the lots have to be purchased first.

"To me, ownership is power," says Graziani.