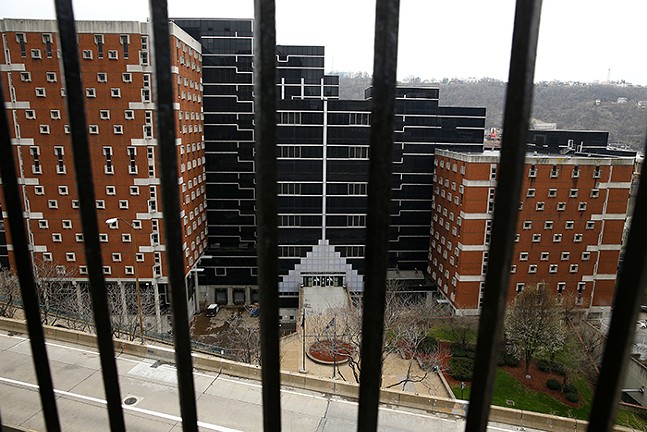 CP photo: Jared Wickerham
Allegheny County Jail
Today, five current inmates at the Allegheny County Jail have filed a lawsuit against the county, Warden Orlando Harper, and county and jail officials in charge of mental health. The lawsuit alleges that the jail is “rife with systemic deficiencies that deprive people with psychiatric disabilities of necessary care, and, indeed, make their conditions worse.”

The plaintiffs are all inmates within the jail and suffer from psychiatric disabilities such as PTSD (Post Traumatic Stress Disorder), bipolar disorder, schizoaffective disorder, and depression. The lawsuit claims these alleged conditions should be brought forth because 75% to 80% of those held at ACJ are constitutionally presumed innocent and have not yet been convicted of any crimes. It alleges constitutional violations, and violations against the Americans with Disabilities Act.

"We recognize there are many employees at ACJ who try their best to provide care, yet face an impossible task due to inadequate systems, resources, and direction," said Keith Whitson of Schnader Harrison Segal & Lewis LLP in a press release. "This lawsuit focuses primarily on the illegal systemic failures that make treatment nearly nonexistent, and the frequent imposition of punishment in place of treatment."

The lawsuit was filed on behalf of the inmates by The Abolitionist Law Center (ALC), Pennsylvania Institutional Law Project (PILP), and Schnader Harrison Segal & Lewis LLP. It was filed in U.S. District Court of Western Pennsylvania, and is a class-action lawsuit.

According to a press release, the complaint contends that proper staff training and adequate mental health staffing levels have not been met by Harper or Deputy Warden Laura Williams. The lawsuit also alleges that the plaintiffs have been held for long stints in solitary confinement as a punishment for seeking mental health care. One plaintiff claims they have been placed in solitary for over a year.

"An extensive investigation of the conditions at ACJ, including hundreds of interviews of those currently and formerly incarcerated at ACJ, as well as former employees, and review of medical records, have reinforced what we already knew — the system of mental health care at ACJ is appallingly and unconstitutionally inadequate," said Jaclyn Kurin, staff attorney for the Abolitionist Law Center, in a press release.

The lawsuit also is concerned about the racial disparity that exists at the jail and how these alleged conditions will disproportionately impact Black people. While Black people only make up about 13% of the population of Allegheny County, they constitute 61% of those held at ACJ.

This trend applies to youth as well. WESA reported yesterday that Black girls in Allegheny County were 10 times more likely than their white counterparts to be involved in the juvenile justice system last year, and Black boys were seven times as likely as white boys. In 2018, Pittsburgh City Paper reported that Black teens in Allegheny County were 20 times more likely to be charged as adults compared to white teens.

Alexandra Morgan-Kurtz, Managing Attorney at the Pennsylvania Institutional Law Project, said the county is failing its most vulnerable communities, especially when incarcerating people with psychiatric disabilities.

“Without a complete overhaul of the practices at ACJ, people will continue to suffer long lasting trauma and grievous harm,” said Morgan-Kurtz in a press release.

Full lawsuit is shown below: