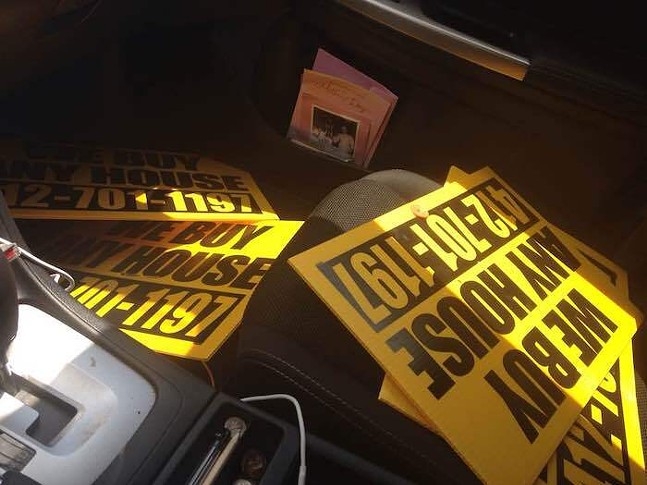 The signs have been around for years, and Pennsylvania General Attorney Josh Shapiro put out a warning in March 2019. He called the signs a scam and cautioning Pennsylvanians to be wary since businesses might offer less than what the house is worth, while leaving customers subject to foreclosure. “These scammers are attempting to exploit Pennsylvanians in vulnerable financial situations, and my Bureau of Consumer Protection isn’t buying it,” Shapiro said at the time.

In Lawrenceville, the signs and wholesale home-buying efforts have come under such criticism, that that community group Lawrenceville United is willing to get creative to incentive others in taking down the "We Buy Houses" signs.

Bright yellow signs with black text reading “We Buy Any House” once filled the front seat of Lawrenceville United executive director Dave Breingan’s car.  In a tweet on June 16, Lawrenceville United offered prizes to people who bring in variations of the “We Buy Houses” spotted in neighborhoods around Pittsburgh.


Standing offer: LU will give you a prize for every "We Buy Houses" sign you bring to us! https://t.co/BQWPlnltXi


Breingan admits that Lawrenceville United’s initial offer, was “somewhat tongue-in-cheek,” but says the group is actually eager to give prizes to people who bring in signs. While no one has taken them up on their offer yet, Breingan promises that Lawrenceville United will provide a prize from items they have laying around the office. Exactly what the prize will be, however, “will be a surprise even to us!”

The signs are often posted illegally, as it is illegal to post signs in the public right of way or attach them to trees, utility poles, fences, and outdoor benches. It is also illegal to place signs on property without the owner or agent’s permission.

Breingan says it's the city of Pittsburgh’s responsibility to remove illegally placed signs, and if people wish to have the city remove them, they can call 311 if the signs are not on their private property. But for those who desire a prize, they can take signs to Lawrenceville United offices at 118 52nd St., Suite 2026, Lawrenceville.

“This is one piece of a trend of practices that often specifically target older adults and low income homeowners in a hot market like Lawrenceville,” says Breingan. “And they [companies posting signs] can prey on long-time residents who may have bought their house very cheap a long time ago and aren't aware of just how much their property is worth these days.”Lawrenceville United: 118 52nd St., Suite 2026, Lawrenceville. lunited.org