CP photo: Jared Wickerham
Daniel Gurwin's small business signs in Lawrenceville
Pittsburgh graphic artist Daniel Gurwin misses his morning routine of waking up and walking his dog through Arsenal Park before heading over to Espresso A Mano for a cappuccino. Gurwin — who's lived in Lawrenceville for nearly 10 years, since moving back to Pittsburgh after graduating from Ohio State — says he doesn’t want to pick favorites when asked which neighborhood business he will visit first when the pandemic closures are lifted.

“I love them all.” But he says he really, really misses his morning cappuccinos. “As soon as they’re back open,” he adds, “I’m there.”

When he first moved to the neighborhood in 2012, Gurwin says Lawrenceville was in the midst of its wave of expansion. “As a graphic designer working with brands and logos, it was the perfect marriage and really great to participate in that neighborhood growth,” he says. “I’ve really always felt connected to the neighborhood for that reason.”

Gurwin says that’s a cool project for him to see come to life, and shares that he has friends who send him pictures of his sign as they drive into the state; but, it’s work decorating the businesses of his hometown that seems to make him most happy. And when he saw how many of the doors on those businesses had to close because of the pandemic, Gurwin knew he wanted to do something to help.

CP photo: Jared Wickerham
One of Daniel Gurwin's small business signs in Lawrenceville
Gurwin, after all, has recently lost business himself. His clients include restaurants and retail shops that have had to pivot to online sales or take-out or delivery, if they even remained open at all. “There are projects that were going full steam, then situations and plans change,” he says. “The nature of my business is ever-changing.”

So with extra time on his hands, a determination to help his neighborhood, and the luck of sharing a studio with a sign painter (Andrew Paul of Run Rabbit Gilding) who was out of town when the pandemic began, Gurwin “put on his sign painting hat” and designed hand-lettered signs to distribute for free throughout Lawrenceville and which can now be seen displayed in windows up and down Butler Street. 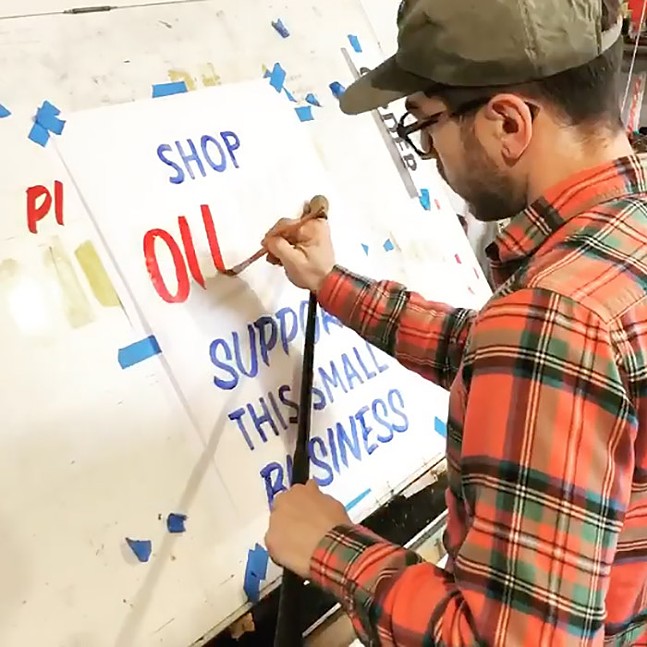 Photo: Instagram.com/DanielGurwin
Daniel Gurwin painting one of his small business signs
Gurwin says he loves seeing his signs in the businesses he loves in the neighborhood he loves. (He still has some signs left if any Lawrenceville businesses are in need, and he promises socially distant-friendly pick-ups. He encourages folks to send him an email to schedule a time to pick up a free sign from his porch.)

But why give the signs away for free when he himself is losing money during the pandemic? Because Gurwin appreciates “the sense of togetherness that comes from everyone helping everyone else, neighbors looking out for neighbors.” And, one can tell after talking to the artist for even a short while, he just really, really loves his neighborhood.

“Even though the doors are closed and the windows are down, it still feels like the neighborhood is connecting with itself. There’s still a community,” Gurwin says. “That’s what I wanted the signs to do. Make it clear that these buildings aren’t vacant and silent.”

Got signs if you need em ✌🏼