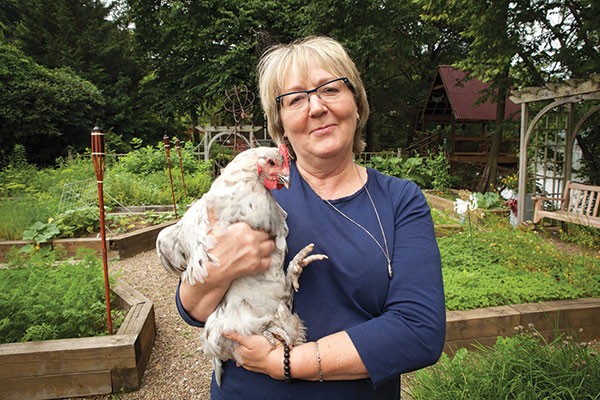 Danko-Day and others tasked with overhauling the city's current laws knew the number of applicants didn't add up.

"What happened was because of the cost and rigorous process, a lot of people said, ‘To heck with it. I'm going to save my time and just talk to my neighbors myself,'" says Stephen Repasky, president of Burgh Bees, an organization which also collaborated on the new law. The nonprofit's mission is to promote beekeeping in Allegheny County.

"[The new changes are] going to bring a lot of beekeepers out from underground, so to speak," says Repasky, who adds that he could easily think of 25 "underground" beekeepers within city limits.

"It might be a couple of papers and a site plan that needs to be drawn, but we'll have instructions for that," Danko-Day says. The planning commission will "come out and inspect once your chicken coop or goat pen is up. They'll make sure it's what you drew in your site plan."

Residents with 2,000 square feet — including any structures — will be able to have two beehives, along with either five chickens, five ducks or two miniature goats. For 10,000-square-foot lots, two regular-sized goats are permitted with chickens or ducks and bees. All goats must be dehorned and the males neutered; goats must be in pairs. Regardless of lot size, the law requires secure enclosures for animals, and the Department of Permits, Licenses and Inspections, as well as the Bureau of Animal Control, will be charged with enforcing restrictions.

The animals' quarters were of particular concern to Councilor Darlene Harris, who added language to the bill last week.

"I didn't think it had enough about where the animals would reside," Harris said, comparing her concern to legislation she championed in December regarding the safety of dogs. "I wanted to make sure that they were [in] covered, well-ventilated, dry, predator-resistant and properly maintained [enclosures]."

Another councilor with concerns is City Council President Bruce Kraus, who represents a district with varying types of neighborhoods — from the roomier Hilltop to the cramped South Side.

"I don't think my neighbors would be real happy if I put two goats outside," Kraus said during the June 23 hearing. His concern was that while his property in South Side meets the square-footage requirement, his house is included in that measurement. "I would like to talk about lot size as it includes actual structures," he said to the city-planning representatives who presented the bill.

Kraus has not returned calls seeking additional comment on his reservations with the new legislation.

But, there really hasn't been much opposition, says Danko-Day.

"It's such a change from 2011, when it was a controversy, and people were coming and testifying," she says."We had a public meeting this year with 130 people, and we didn't hear anybody say anything that was negative. We're only a couple of generations removed from these activities in the first place. I think people are realizing [that]."

"Growing up, I had ducks, chickens. I've had animals around me all my life," said Harris who was raised in Spring Hill, where she says it used to be farmland. "It's like being in the country in the city. As long as people are taking care of the animals they have, I don't have a problem with it."

For others, the issue is about food sovereignty, access and public health.

"We're trying to have a code that lines up our history with our future," says Dawn Plummer, director of the Pittsburgh Food Policy Council of Penn State, which collaborated with city planning on the changes. "We absolutely think hunger is a critical issue in the city and region. Having access to growing food and keeping small livestock connects you to the source of your food, which is critically important and speaks to regional challenges of high obesity and chronic diseases."

All of the bill's supporters acknowledge that public awareness is going to be key. Grow Pittsburgh, a nonprofit that educates youth and runs small farms in neighborhoods considered to be food deserts, will hold a backyard goat-keeping workshop in late August.

One reason for the workshop, says Marisa Manheim, of Grow Pittsburgh, is that a lot of people want goats for their milk, but there's a lot to learn. For instance, a person either needs to send his or her goat for a "conjugal visit" or order sperm and artificially inseminate it themselves. "In order to actually have milk, you're kind of going through a lot of extra effort," she says. "You have to have a pregnant goat that carries to term, and then there are babies to deal with. It's not the same as getting a dog." But there are advantages, she assures; for instance, goat manure, which "is full of nitrogen."

Thompson, the Mexican War Streets resident, is happy the changes are getting a strong reception.

"I can't believe this might actually be over soon," she says.

And, she minces no words about her views.

"This isn't just people toying with goofy little hobbies, this is about food," Thompson explains. "This is serious stuff."