LaToya Ruby Frazier’s The Notion of Family, at Silver Eye 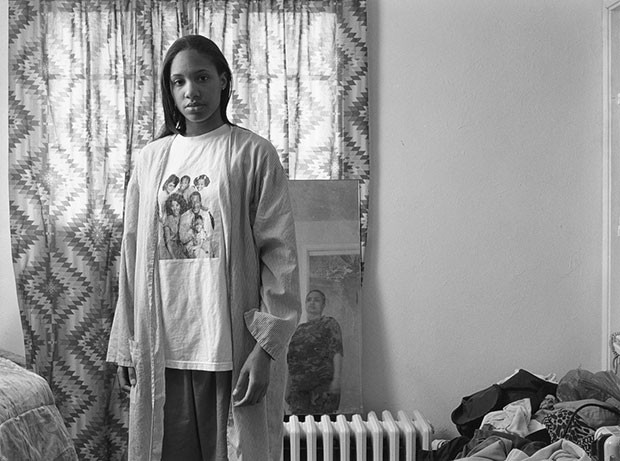 THE NOTION OF FAMILY

As residents of this city, we might regard the work of LaToya Ruby Frazier as local. Hailing from Braddock, Frazier utilizes her neighborhood as not only a setting but as a presence, a primary character in the vivid, sometimes stark, always eloquent narratives she documents in precise black and white. But the reality is that the nationally known Frazier — who now splits time between Pittsburgh, New York and Chicago — is one of the most thrilling, emotionally charged photographers not just in Pittsburgh, but in America.

In her 2001-14 series The Notion of Family, excerpts of which are now at the Silver Eye Center for Photography, she turned the lens on her grandmother, mother and self. There are appearances by a grandfather, and her mother’s boyfriend, Mister Art. But the women take focus, sometimes literally. In one portrait, Mister Art in front fills the frame, but the clarity is given to the woman behind him.

These works tell a story of love, struggle and connection, with honesty, without mawkishness, and emphasize the persistence of humanity in a world often inhumane. In one piece, a young Frazier coyly directs at the camera a Mona Lisa smile; she’s a loose-limbed, coltish adolescent sitting on a pristine carpet with a grandmother who a bit warily eyes the lens. The television behind them is set to A&E, the room adorned with dolls and statues, and it’s a lovely intimate glimpse into warm domesticity. On the gallery wall opposite is a different portrait — Frazier and her mother, with Grandma Ruby in a coffin. While her mother’s gaze hits the ground, Frazier’s look here is guarded, flat and ready; while she is standing straight, she hums with the intensity of grief. In other images, we see the change in her grandmother’s surroundings, the littered carpet and a once cozy room now bare, Frazier shouldering full garbage bags within.

The potential decline of the body is juxtaposed with the definite decline of the neighborhood in images of an epilepsy test and a hospital halfway demolished, set side by side; the carcass of UPMC Braddock dominates these landscapes like a wound spreading its infection to the workers who protest its unfairness. But the closeness of these women, and the men who satellite them, transcends the blight. Ultimately love wins.