Before Marlene and José Jaramillo Valdez moved to the area, they had come to know Pittsburgh as a city devoid of Latino eateries, stores, and culture.

But since leaving Philadelphia to start a new life in Penn Hills three years ago, the couple have witnessed an emerging Latino business community, which they’ve fed into by opening the area’s first Latino grocery store, Orquidea Latin Market in Monroeville, earlier this year.

Their store on Old William Penn Highway is open seven days a week and provides an important service to a growing community of Latinos living in Pittsburgh's Eastern suburbs, offering products from all over Latin America.

Its shelves are lined with spices, condiments, and imported delicacies like frozen guinea pig and fresh Nopalitos — flat green cactus leaves with reputed health benefits that can accompany a range of dishes when correctly prepared.

The biggest draw for regulars, according to Marlene, is their extensive offering of Latin-American-manufactured candy and confectionery.

“The people’s response tells us we didn’t make a mistake,” she says.

The Jaramillo Valdezes both grew up in Ecuador, but have spent most of their adult lives in the U.S., first in New York and then Philadelphia, before crossing the state to Pittsburgh.

At first, Pennsylvania’s sleepy second city felt jarring to the life-long urbanites, but they have since come to enjoy life in its spacious, tree-covered suburbs. And so have their three school-age children.

Among major metro areas, Pittsburgh’s Latino community is comparatively small, although in recent years, it’s grown at an accelerated pace. The 2020 census counted around 34,300 living in Allegheny County, roughly double that of 10 years earlier, but still less than 3% of the total population. On the other side of the state, nearly 240,000 Latinos live within Philadelphia County — about 15% of its inhabitants.

By 2010, census data shows, Pittsburgh’s eastern suburbs were home to a substantial portion of the region’s small but growing Latino population. Since then, the community has continued to expand, although at a slightly slower rate than the county’s southern and western fringes.

Ella Serrato, a realtor based in Fox Chapel, says this year, she’s helped several Latino families find homes in Monroeville, along with others in neighboring communities.

This, says Serrato, marks a shift from earlier Latino arrivals, who tended to cluster around the Oakland-Downtown commercial corridor.

“Now … we have families relocating [further out from the city] because they find … you have a good school district, affordability, you can buy a house, you can have safety,” Serrato says. “The people are looking to come to the Monroeville area for the school district, also it is very close to the malls, there are parks around the area. It's a really nice neighborhood.”

For Luis and Imelda De Leon, who have spent much of their life in a Virginia suburb of Washington, D.C., moving within Pittsburgh’s accessible real estate market offered their first opportunity for homeownership.

The couple relocated here to be closer to their children and grandchildren, and bought their first home in Turtle Creek a few years ago. Earlier this year, they moved again to a larger home in Monroeville, where they like to walk their dogs through their neighborhood plan and the surrounding parks and green spaces.

“One of the biggest dreams for us is to own a house, and you can do it here,” Serrato says.

The De Leons talk fondly of their life in Monroeville, but their journey here was flecked with pain and setbacks.

When, about 20 years ago, Imelda learned her father was dying, she made an agonizing decision to visit him in Guatemala, knowing that, because of her immigration status, she could face real difficulty returning to her husband and children in Virginia.

Her journey back to the U.S. via Mexico involved swimming across a river, scrambling through barbed wire, and ultimately escaping from a smuggler.

Her daughter Rosamaria Cristello says when they were finally reunited several months later, she barely recognized her mother, who had lost about half her body weight.

“She did not look herself,” says Cristello, who has channeled the deep trauma from this experience into a career in advocacy and support work at the Latino Community Center, a nonprofit she founded in 2017.

“We're there to wrap our arms around families that are just like mine was,” says Cristello. “And that's the heart of the center, at the root of it is, like, we've been there and no one should have to go through that. No one should have to make these decisions.”

Cristello says this pain can endure, but it can also give way to healing, as it has done for her family.

“Now I can say that I feel complete,” says Imelda, referring to her spacious home close to her family and the financial security provided by both her and Luis’ stable jobs.

But their success does not mean they no longer face prejudice. Luis says at least one person involved in hiring him for his previous job expressed doubt on account of his ethnicity.

“They'd been unsure about hiring me, but then give me the opportunity,” Luis recalls.

By the time he left to take a promotion at a different firm, Luis’ employers acknowledged a loss to their workforce. 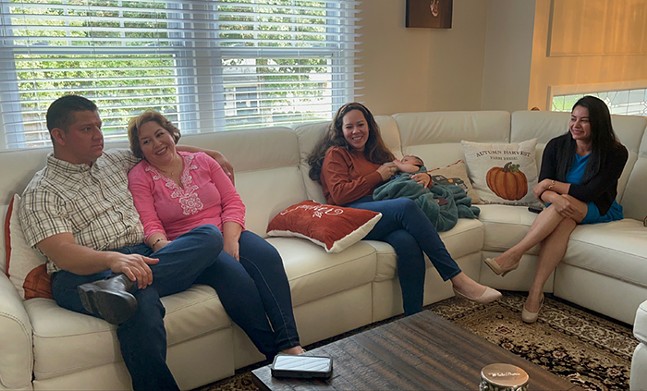 Serrato says that, for many Latino families, buying a home represents the conclusion of a long journey marked with highs and lows. Her work as a realtor brings her alongside clients as they reach an emotional milestone.

“With each family that I have had the opportunity to help to buy a house, there is always a story,” Serrato says. “And that's why many of the times there are tears when they close and they get the keys.”

Serrato’s own life has presented its share of trials. Born in Colombia, Serrato earned a degree in computer science and found work in Arizona. She came to Pittsburgh in 2011, and chose to step back from her software engineering career because the regular travel took her away from her family.

She trained as a realtor, and has built up a steady business selling homes around the city. But a painful encounter while finalizing her second sale made her consider giving in before she got started.

During the sale, Serrato was working with a renowned local agent, who, struggling to understand Serrato during a pivotal phone conversation, told her, “You have to speak better.”

Serrato was able to close the deal by following up by email. But the encounter still knocked her confidence.

“I felt so bad for a week, and I thought, ‘I don’t know if I want to do this,,” Serrato says. “But you have to overcome all these objections to all of these things that we face. I feel like those things make us stronger and then we can go and we can keep moving.”

Within a year, Serrato says she was recognized as one of the most successful agents in her office.

For the Jaramillo Valdez family, work rarely stops. Every two weeks, José drives to New Jersey, loads a truck full of supplies, and returns to Monroeville the same day. José, who runs a flooring company in addition to helping his wife at Orquidea, says there are no wholesalers carrying Latin-American imports within closer reach of their home.

“Sometimes he drives through the night,” says Marlene.

Other than helping her husband with some bookkeeping, Marlene had no experience running a business before opening Orqidea, but frustration with the lack of local places to shop and eat encouraged her to pursue her longtime dream of setting up on her own.

“I was on the lookout and I saw this place was to rent and I told [José] there was a premises that had appeared and that’s the place,” Marlene says. “It’s close to home, to the school. And he said ‘I don’t really know much about how that sort of business works, but if you do …’”

“I have always been like that,” she says. “If I don’t know how to do something, I find a way.”

This attitude, says Cristello, is a defining trait of Latino communities in America.

“Luis has a job, but he's already thinking of the business that he's wanting to start,” says Cristello of her stepfather. “So I think that's just ingrained in our culture. We are very entrepreneur-minded. So I can definitely see this area start to pop up more businesses for sure.”

Maria Manautou Matos, from Pittsburgh Latino Magazine, and Ladimir Garcia, a West Virginia University student and a Pittsburgh City Paper summer intern and freelancer, contributed to this report, which was made possible with financial support from the Pittsburgh Media Partnership.

This feature is the second in a series of articles focusing on the growing Latino communities in Pittsburgh, co-published with Pittsburgh City Paper and Pittsburgh Latino Magazine.