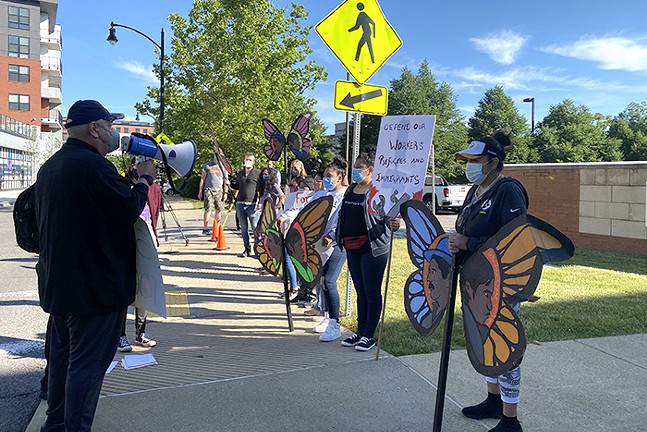 On April 21, the Executive Office for Immigration Review released a notice with the title, “EOIR to stop holding hearings in Pittsburgh on Sidney Street,” which announced the closing of its hearing location here in Pittsburgh, the only one within the region besides Philadelphia. The court officially closed on April 29.

According to the same notice, the court was closed due to “space and personnel limitations.” EOIR said in the notice that it was “committed to continuing to serve Pittsburgh-area respondents and their representatives through the Philadelphia Immigration Court’s operations.” But Perkins believes that there are easier solutions that don't include closing the court.

The immigration court served the Greater Pittsburgh Area, but it also provided services to the entire state of West Virginia. With the court closing, many families who need to go to immigration court must now travel to Philadelphia or find a virtual alternative.

U.S. Sen. Bob Casey and U.S. Reps. Mike Doyle and Conor Lamb sent a letter to Chief Immigration Judge, Tracy Short, in which they outlined the importance of keeping the immigration court in Pittsburgh.

“With the closure of the Sidney Street facility, those without adequate access to stable internet or the resources to afford it, would likely be forced to travel to Philadelphia,” says Casey, Doyle, and Lamb in the letter, “placing additional burden on the respondents and their attorneys, particularly, for respondents and their attorneys who had to travel the day before for early hearings, which costs additional time and money.”

In the notice provided by the EOIR, those who have a hearing in Philadelphia will have the option to have their cases heard remotely from their homes or offices, but Casa San Jose and the representatives agree that is not sufficient action.

“Considering the disproportionate gap in connectivity for immigrant households, coupled with Pennsylvania’s overall challenges in accessing broadband, access to stable, affordable high-speed internet is a challenge for many of our constituents,” says the joint letter.

Casa San Jose also highlighted the burden that traveling to Philadelphia would impose on those in the Latino community.

“We believe many of our Latino community members do not have the financial capacity to pay the additional costs of driving or taking public transit to this city. Furthermore, they cannot afford to stay overnight in Philadelphia and miss an extra day of work,” says Casa San Jose in a press release.

According to Casey, Doyle, and Lamb, EOIR knew of the potential closure of the court in December 2021 and was notified there would be a 45-day extension for the court to operate on March 15, 2022.

“At any point throughout these discussions with DHS, EOIR should have notified the public of a potential closure of the location,” says the letter from the joint letter. “Failing to do so hurt the ability of many stakeholders to find alternative accommodations for their hearings and for a thorough public review of the proposed closure.”

The court still remains closed in Pittsburgh but Casa San Jose has launched a petition, calling to keep the immigration court in Pittsburgh.