Late Night At The Pittsburgh Post-Gazette

I round the corner and there she is: a real, live woman.

It’s 4:55 p.m. on February 14th, and I’m about to hang up my pen for the day. As the editorial cartoonist for the Pittsburgh Post-Gazette, I’ve had a long week of drawing cartoons about how women are stupid, and it’s time for some much needed R&R.

The hallway is empty as I head for the elevators, except for — is that a swish of skirt fabric, up ahead? I round the corner and there she is: a real, live woman. I rarely interact with human women, although you definitely can’t tell that from my very accurate cartoons.

I clear my throat. “Hello there, miss,” I say. “Would you like me to press the elevator button for you, or are you one of those modern gals?” 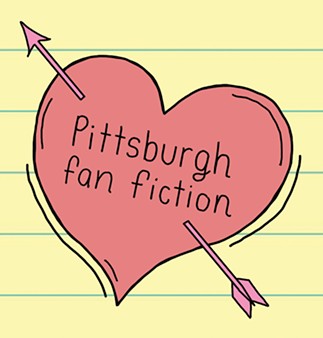 She laughs. “I’m not a gal at all,” she says. At first, I’m caught off guard because her flowing red frock is giving me feelings in my bathing suit area, the sort of feelings I really don’t want to examine if she turns out to be RuPaul. But then she clarifies: “I’m your conscience.”

“My conscience?” I ask. “Didn’t realize I had one of those.”

“Only just barely,” she replies. “But it’s true. Deep down inside you, you know your cartoons are outdated and sexist. Some part of you knows that continuing to accept a paycheck for drawing them is morally reprehensible.”

“Cartoons that re-affirm misogynistic structures of power,” she says. “Women are paid less, interrupted more, treated as objects, denied access to healthcare. Your cartoons contribute to that state of mind.”

“Are you sure?” she asks. “Because as your conscience, I think you may be afraid.”

I chuckle. “Afraid of women? But they’re women!”

“I don’t mean afraid of women,” she says. “Although you probably are that, too. I mean afraid of death. These cheap-shot cartoons recycling jokes that would barely be funny in the 1950s are your paper’s — and by extension, your own — last grasp at relevance in a changing world. No matter how many cartoons you draw, know this: the world is moving on, and it is leaving you behind. One day you, and the backward views you hold will die. Your existence on earth will be forgotten. Rage against women, whose growing power in society you no doubt blame for your decreasing power, all you want. You will still one day be irrelevant. Meaningless. Nothing. You are going to die, and what’s more, you will die knowing you spent your time making the world worse instead of better.”

I inhale sharply, not knowing what to say. “Well, that’s … uh … do you want to grab dinner?”