Allegheny Council candidate Olivia “Liv” Bennett ran her campaign on expanding affordable housing in Allegheny County, inspired by her own experience living in a low-income housing complex in Northview Heights.

“She is currently a resident of public housing in Northview Heights and can be found working with area leaders and partners to ensure local residents receive the resources that they need,” reads her campaign website. “Last year, she was involved in the process of opening the Northview Heights Public Safety Center in her neighborhood.”

But her opponents are spreading rumors that Bennett doesn’t live in Northview Heights, insinuating that she lives in Baldwin Borough — outside of Allegheny County Council District 13, where she is running.

Incumbent Denise Ranalli Russell (D-Brighton Heights) is running for re-election against Bennett. On May 19, her husband Sean Russell posted on Facebook, “Just wondering if anyone else finds it weird that my wife's opponent has a voting address on north side and a mailing address in Baldwin twp.” 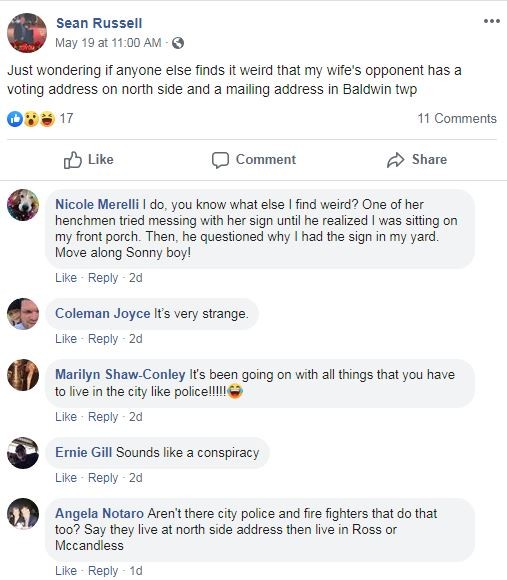 Graham Robinson says Quigley then walked over closer to the entrance of the polling place and talked to several voters as they entered to vote. She says she couldn’t make out what Quigley was saying to the voters.

Even if Bennett's residency was called into question, launching accusations days before an election is typically seen as a political view to sway votes, rather than legitimately challenging a candidate's eligibility.

Last year when now state Sen. Lindsey Williams (D-West View) was running for her seat, the Pennsylvania Republican Party supported a lawsuit challenging her residency. That lawsuit, which was filed just weeks before the election, was thrown out because it missed the deadline to challenge a candidate's residency by months.

Teer says the accusations by Russell and Quigley are uncalled for and not in the spirit of the race.

“I think that it really unfair,” says Teer. “We have tried to be optimistic and focus on police. I want to run a positive race.”