Lars and the Real Girl 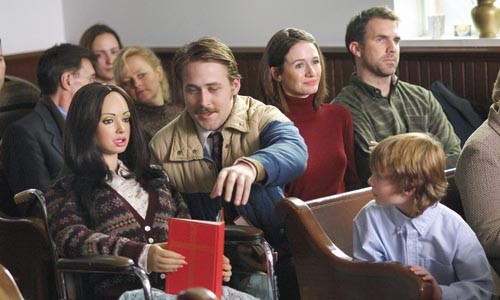 The family that prays together: from left, "Bianca," Ryan Gosling, Emily Mortimer and Paul Schneider

It may take you a while to get to where you need to be to appreciate Lars and the Real Girl, the story of a withdrawn, 27-year-old Wisconsin office drone who has a bittersweet relationship with an inflatable doll that he buys on the Internet.

See what I mean? That sentence either made you turn the page or made you laugh. If you did the former, then I'm talking to you the way Lars talks to his doll named Bianca. But if you laughed, then you need to see Lars and the Real Girl in full context.

There's a difference between a comedy about mental illness and a comedy about someone who's mentally ill. You can do the former, maybe, if you're good. As it happens, Lars and the Real Girl is neither, nor is it a story about a Fargo-esque town of loopy eccentrics (minus the blood). When the introverted Lars, beautifully portrayed by Ryan Gosling, forsakes his troubled reality -- after experiencing romantic feelings for a sweet new girl at his office -- it take a village and the spring thaw to ease him out of it.

That's the point of this lovely and very delicate movie, written by Nancy Oliver (who worked on Six Feet Under), and directed by Craig Gillespie (Mr. Woodcock). There's nothing funny about Lars' illness: His mother died in childbirth; his father tried his best but withheld emotion; and Lars, who wears layers of clothing to protect himself, now experiences a burning sensation when someone touches him. He can only be touched metaphorically, with compassion and patience, and that's what everyone around him does.

At times, his interaction with Bianca, and the way people interact with both of them, borders on the ridiculous, but only if you see them all as bittersweet movie characters. If you do them the courtesy of seeing them as real, then Lars' suffering is occasionally overwhelming. Most of the people who buy dolls like Bianca buy them for fantasy, so they keep it to themselves. Lars is delusional -- he believes she's real -- so he has nothing to hide. Either this simple explanation will sell you on his circumstance, or it simply won't.

A movie like this has few kin, even in true Scandinavian cinema, as opposed to American cinema about people with Scandinavian ancestry. Earlier this year we had Mike White's equally disturbing Year of the Dog. And there's Aki Kaurismäki, the Finnish director whose characters live just on the other side of the thin line that separates them from someone like Lars.

It's not as if Lars is alone in the world. He lives next door to his brother, Gus (Paul Schneider), and sister-in-law, Karin (Emily Mortimer), who especially reaches out to him. When he takes up with Bianca, Gus and Karin don't know what to do. So they go along, while at the same time putting him under the care of their town's family practitioner (Patricia Clarkson), who's also a psychologist. "She says you have to be this far north," Karin explains. It's OK to laugh at that because it's dryly funny, just as when Lars asks how "the game" went, and Gus says: "The cheese inspectors beat the crap out of us."

Lars and the Real Girl is sprinkled with wisdom that approaches the maudlin. It's all a matter of tone, and Gillespie gets it just right most of the time. Lars is probably a virgin, and when he asks Gus how he knew he'd become a man, at first Gus hints that it has to do with sex. But then he tells Lars that you become a man when you do what's right for others, not just what's right for you. "It sounds like it's easy but it's not," he says.

The rest of Lars and the Real Girl walks a similar tightrope and rarely stumbles, except for the people who just don't get it. (And trust me, it wasn't just nervous laughter at the screening.) Gosling favors the lugubrious in his choices as an actor, but he's never put his introspection and unforced charisma to such absorbing use. He and the luscious Clarkson are electric together in a movie that asks you to join Lars' orbit for a life-saving effort that requires more than most of us are probably capable of giving.