“This is my passion. I enjoy preparing foods and teaching people what to do.” 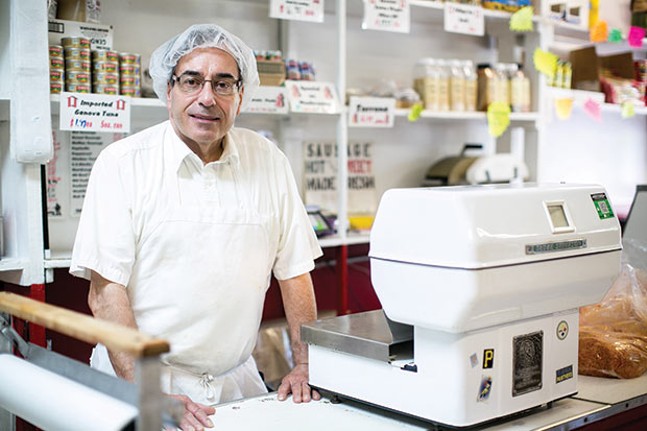 The Pittsburgh dining scene is increasingly embracing the old school.

Specialty shops such as Chantal’s Cheese Shop or Gryphon Tea Company function much like grocers did before the advent of large supermarkets and big box stores. They offer a limited number of products and count on expertise and customer service to make up for a breadth of choice.

Henry Grasso, Co. Inc., a sausage and butcher shop in Larimer, follows this business model, but not because it is looking to hone in on a hip market.  This model has been business-as-usual for the last 80 years.

Joseph Grasso, 65, is proprietor of the shop. It was passed to him by his father, the shop’s namesake. Henry Grasso was a first-generation Italian immigrant in his 20s when he opened the butchery. He moved the business to its current location in Larimer in 1938.

Grasso picked up a love for butchery from his father, who had made sausage back in Italy. At the end of the Great Depression, Larimer was a bustling community with rows of commercial shops. Until the 1960s, Larimer served as Pittsburgh’s Little Italy and the Grassos made a living selling Italian sweet and hot sausage and other small grocery goods.

Walking into the shop now is like traveling to a bygone era.

It stands alone on Larimer Avenue, with the same hand-lettered sign it's had since the beginning. The motifs are all in the colors of the Italian flag, and inside white countertops and stainless-steel butcher's tables gleam with the antiseptic cleanliness of a surgery theater. Men of all ages — clad in white aprons, shirts and hair nets — bustle around, grinding meat and filling casings, stopping to clean as they go. In contrast to the business-like affect and cleanliness, the space is warm and peppered with decorative pigs (an homage to the animal that enables their livelihood) given over the years by wives and customers. On the spare shelves are makings of a full, simple dinner: olive oil, pasta, red sauce, broth, olives; and in the coolers, meats of all kinds.

Grasso estimates that around 80 percent of business is wholesale. The rest is sold retail to families coming by to get a few specialty items. He says a number of his returning customers are second and third generation. They come by often on Saturdays to chat with him and his employees.

This shop, which used to do significantly more retail business, has had to adjust as the neighborhood has seen changes because of rising prices and the start of a new wave of gentrification in East Liberty.

Grasso is a staunch supporter of small businesses, speaking fondly of when families and neighbors would order in bulk from Larimer's mom-and-pop establishments. He’s also proud of the work he’s been able to do as a mentor to other young professionals in his field.

Grasso, who has worked at the shop since he was a teenager, says he’s never doubted his commitment to the business, his vendors, and his community of customers.

“This is my passion,” he says. “I enjoy preparing foods and teaching people what to do. When I was starting out, I had a lot of people mentor me. Now I feel like I’m returning the favor.”