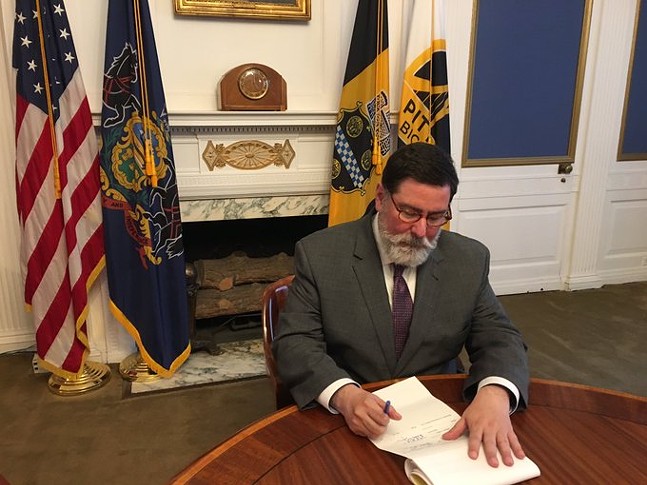 Photo: City of Pittsburgh
Bill Peduto signing the Lawrenceville inclusionary zoning pilot
Affordable housing shortages have been a major issue in Pittsburgh over the last several years, and yesterday, the neighborhood that arguably is facing the harshest affordability crisis is getting some relief.

According to PublicSource, Gross said on Wednesday, “This is really a historic moment.”


The ordinance will be temporary and only active for 18 months. It requires developers building rental-housing complexes in Lawrenceville that are greater than 20 units to ensure at least 10 percent of their units are affordable to households at or below 50 percent of the Area Median Income (AMI).

Indianapolis-based developer Milhaus is building a large extension to their Arsenal 201 complex on Butler Street, and the developer is supportive of the inclusionary zoning pilot. The new development will create 35 units affordable to people making at or below 50 percent AMI.

According to PublicSource, developers can also comply by selling those properties to a Community Land Trust, which Lawrenceville currently has, or secure a deed restriction to keep the property affordable.

Units designated affordable under the ordinance must remain that way for 35 years.

Pittsburgh enacting an inclusionary zoning policy, even if temporary, is rare among comparable cities. Many Rust Belt cities have more affordable home prices available compared to higher-cost cities like New York, San Francisco, or Washington, D.C. But even Pittsburgh, which still has several neighborhoods with large stocks of relatively inexpensive housing, also has neighborhoods where housing prices are rising fast and contributing to gentrification. This is a stark problem in Lawrenceville.